My name is Tasha Cornett. I’m a 30 year old female from Northeast TN. I work in internal medicine and unfortunately know way too much about treating UC. 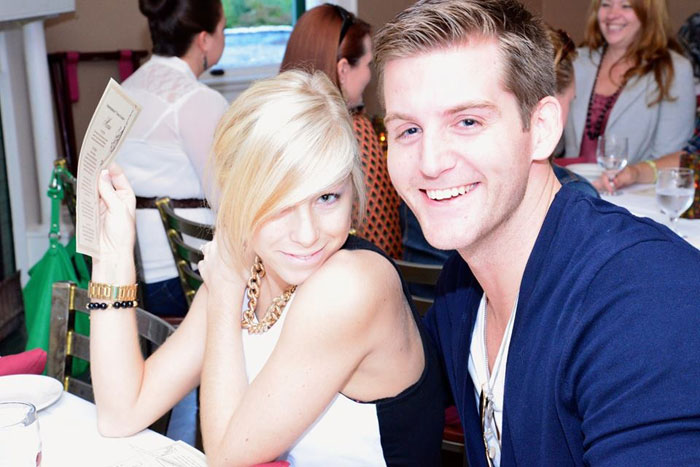 Tasha with her Fiance

Some more about Tasha:

I enjoy running and eating delicious food. I spend most of my free time right now planning my wedding that will be this summer!! Woot woot!

I was first diagnosed at age 16. Took a couple months of asacol, got better, forgot about UC… For 11 wonderful years.
Then the mucus filled BMs started.

I had symptoms for a couple of months before I decided to see a GI. Finally had a colonoscopy which confirmed UC, only a small portion of my colon was affected at that time. I started taking Apriso. My symptoms continued to worsen. BMs were now super painful and I was losing a lot of blood. I left work (working in the ER) and drove to the ER near my house. My hgb was 6.1. Needless to say I was admitted.

So for the next two weeks I started IV steroids, abx, and bowel rest. I wound up with a PICC line and TPN for nutrition. When I left the hospital I weighed 82 lbs (pre admit weight was 105). I was started on Remicade after discharge and continued PO steroids.

I continued remicade for several months. I would go to the local cancer center for the infusions. Finally got used to the IVs, premedication which was 50mg of Benadryl, and basically sleeping the whole time. Remicade was not putting me into remission so Imuran was added. Still minimal improvement. I was now getting blood transfusions once a month. My GI suggested surgery but I wasn’t ready to go that route yet.

The remicade was discontinued, I then started Humira. The first time you use humira you have to inject yourself 4 times! Ah! It’s so hard to do that to yourself!! By this time my body was shutting down. I was working 12 hours shifts, getting blood on my days off, still taking prednisone (every time I tried to taper off my sxs became worse, it basically just kept me out of the hospital) and had awful side effects from all the meds.

I wound up having 2 skin cancers appear while taking Imuran. Also had an appendectomy and developed a DVT afterwards most likely secondary to my body being a giant ball of inflammation. My father passed away unexpectedly and I felt like entire world had came to an end. Depression is definitely not UCs friend. My BMs were now so painful that occasionally I was not able to hold them in. at that point I had exhausted conservative treatment and it was now time for surgery. My local GI referred me to Vanderbilt University in Nashville, TN.

Vanderbilt. How they have changed my life. I had another colonoscopy there bc there was some question of crohns vs. UC. They decided it was UC and also told me my colon had to come out… asap. I had a total colectomy Jan 15th and went home 2 days later feeling 100% better. The amount of energy I had was beyond words! Was it hard to get used to an ileostomy? Yes. I was very self conscious about it. My fiancé told me over and over again it wasn’t a big deal… But I just felt like everyone knew, everyone could see it, and they were judging me…
I did get rather depressed but realized this is what was necessary for me to live and the ppl who love me could care less!

I called my ileostomy my “kangaroo pouch.” Became extremely comfortable with it, even cracked jokes about it…. Really funny ones. But of course I was ready to have it reversed! My condition and chronic steroid use caused me to have the J pouch surgery in 3 stages. Colectomy, diverting ileostomy with pouch creation, and then ileostomy takedown. My second surgery was August 14th. This was rather extensive so I spent a bit more time recovering. Luckily the third surgery could be done 6-8 weeks after the second so I had my takedown in October!!

Going to the bathroom was extremely painful at first. Your rectum gets sooooo raw. I still have days where I have quite a bit of pain but it’s nothing compared to what I had previously experienced. Also, after the takedown you have a pretty impressive hole in your abdomen! I have many scars and use Mederma like a full body moisturizer…but…I no longer take an entire pharmacy of meds, and I can go out in public without fear of an accident. I am so thankful for the amazing care I received and as cliche as it sounds I am just thankful to be able to be “me” again.

My first follow up appt since surgery is Jan 19th. I plan on going wedding dress shopping afterwards! My fiancé and I have been engaged for quite some time and postponed our wedding secondary to all of the above events. I would also like to thank him for staying by my side and supporting and loving me through such a difficult time. I’ve been through a lot but I definitely still consider myself extremely lucky!

My name is Tasha Cornett. I’m a 30 year old female from Northeast TN. I work in internal medicine and unfortunately know way too much about treating UC.