Journey to a J Pouch: Completed! 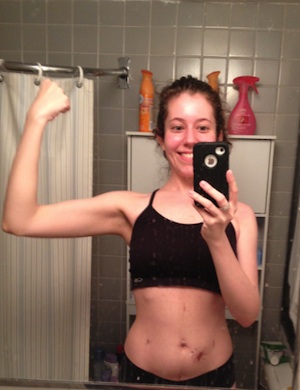 me now after I’ve gained some muscle back from yoga

I’m Kourtney, a 23 year old grad student who’s just had her colon removed. Best decision of my life! I was diagnosed with UC when I was 16, and am now finally symptom free.

Since having the surgery, I’m finally able to function as an active member of my department again — what a concept! For the past 3 weeks I’ve also really gotten into yoga (with my surgeon’s permission), which has helped me gain back my strength and will ultimately help in healing my abdominal muscles.

Journey to a J Pouch: Completed!

This is a follow-up to my original story, “22 Years Old and Facing Surgery.” After deciding to have my colon removed, my first surgery was scheduled for January 22nd. I’ve experienced a lot since then! So I’ve decided to share my experiences and mistakes in the hopes of informing and preventing others from making the same ones.

Mistake #1: I seriously underestimated how long it would take me to recovery from my operation. I think I was overly optimistic that my life would see an immediate improvement now that my colon was gone (and who wouldn’t be inclined to think that with UC?) Although I am 200% certain that I made the right decision and am ecstatic that I went through with this, I definitely experienced some bumps in the road.

The first major issue I experienced was ileus. And I expected this to happen after surgery; it’s completely normal. But mine lasted for quite a while. It was 8 days before I was even allowed so much as a sip of water. I had an NG tube in the whole time during those 8 days, and even with that I was vomiting a lot after the first few days in the hospital. It seems that my body was in more of a shock than I anticipated. But after my bowels started working again I saw a huge improvement in my quality of life.

I was discharged on day 9 of the hospital stay, and I thought there would be smooth sailing from there on out. Boy was I wrong.

Mistake #2: Food choices. I always knew that obstructions were something to be aware of, and that I would most likely encounter one at least once in the near future. I had no idea I would have one so early, though. 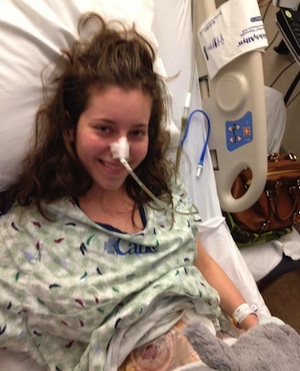 in the hospital after my first surgery

I seem to have bad luck when it comes to obstructions. I ended up having 2 in a row within the first 4 days of being discharged. The first one was because of the rod that they leave in after the surgery to prevent your stoma from slipping back into your abdomen. I was in excruciating pain, but was instantly relieved the minute my surgeon removed it. It was apparently obstructing the opening to the stoma — my surgeon informed me that I had TIFS, or trapped-in fart syndrome. A very technical term…

The next day I make an awful mistake: I ended up having potatoes with the skins on them. Needless to say, this brought me back to the hospital with my second obstruction two days later. I wasn’t aware that your body doesn’t break down things like vegetable skins and ended up learning that lesson the hard way. This obstruction was much worse than the first and landed me in the hospital for an additional 5 days until it passed. During this time I was pumped with a lot of IV fluids to help break it apart. Eating wasn’t allowed though, and eventually I had to get a picc line for nutrition.

After the second bowel obstruction, things greatly improved. Aside from the minor issues of figuring out which flanges worked best to prevent leaks around my stoma, I felt great. Exhausted, but great. It was a surreal feeling to be able to eat and drink without becoming violently ill.

My second surgery was scheduled for April 9th, which I was ecstatic for. But when it came time for me to get in my gown and wait to be rolled into the operating room, I had a huge panic attack and nearly backed out of it. All of the difficulties I faced from the first surgery came flooding back to me. I didn’t know if I could handle something like that a second time around, and so soon. But I managed to calm myself down and go through with it.

Recovering from that surgery was shockingly easy. I was fully expecting to experience ileus again, be in excruciating pain and vomiting…. but none of these things happened. The second day out of surgery I was passing gas and was able to eat soon after.

I know I’m only reiterating what anyone who’s ever had the J Pouch surgery has said, but I’ll say it anyway: prepare for the dreaded butt burn. The first two weeks after surgery were extremely painful. I highly recommend buying loads of diaper rash cream (and adult diapers) ahead of time.

All in all, I know I made the right decision. I am 2 months out of my last surgery and feel great. Sure, some days I’m in pain from adhesions or butt burn, but absolutely none of this compares to the hell I was living in with UC. My next step from here on out will be living my life the way I’ve always wanted to. It’s an amazing feeling.

I included my medication history in my first post “22 Years Old and Facing Surgery.” As of now, the only supplements I take are a multivitamin, an iron pill (NOT delayed release), and an extra B-12 vitamin. I highly recommend taking an extra B-12 supplement once you have a J Pouch. The last portion of the small intestine is what is responsible for absorbing the most B-12, and since that has now been reconfigured into a pouch, there is a greater risk of a B-12 deficiency. A good friend of mine who had the surgery done was feeling awful for a few months, and after a lot of testing, she discovered it was due to an insufficient amount of B-12.

Aside from these, I also eat Metamucil wafers once a day. These are truly a godsend. My surgeon recommended Metamucil to reduce the number of times I go to the bathroom a day, and it really does work wonderfully. I went from going around 20 times a day to 6 after taking these! Always consult your surgeon before taking any supplements, though.

I am a 22 year old PhD student who has lived with UC since the age of 16. My original diagnosis was proctitis, but it spread to pancolitis.

11 thoughts on “Journey to a J Pouch: Completed!”