I’ve Gotta Get Outta This Place 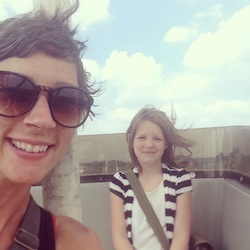 Hello again! Been a while since I’ve posted on here but here it goes…My name is Richele, I’m 32 yrs old. I am a very proud mommy of two amazing girls, ages 7 and 10. Wow! I was diagnosed with UC in 2006, right after my youngest daughter was born. This disease has put me in the hospital too many times to count. I am currently feeling “ok”…but I know I can do better!

Most of the things in my house were either found at a thrift store, or picked out of the trash and reconditioned. I love, love, love finding treasures in the trash and then making them beautiful again. I have always enjoyed working with my hands and am pretty handy around the house. I tell my girls on a regular basis, “You can do anything a man can do.” Change a tire, fix the garbage disposal, mow the lawn, change the oil in your car…ANYTHING! Just doing my job, raising empowered girls.

Current symptoms…diarrhea about 5x a day. Nearly constant, explosive gas, bloating, gurgling. Yay me. Increased, widespread joint pain. Occasional chills, fatigue. Anemia. Yellow eyeballs. Headaches. Little acne like bumps around my ears, eyebrows, chest, shoulders, and back. I don’t know if these symptoms are side effects from Remicade or what. Anyone have similar experiences?

I’ve Gotta Get Outta This Place

It’s been a long road to travel. Having had this disease for almost seven years has certainly taken it’s toll on me. My original story “Pooping Machine” was posted on this site last year. Since then, I have run the SCARY MEDICATION gauntlet. Sometimes there just isn’t a clear answer as to what you should do to get your life back on track, so I started taking 6mp in December 2012. “6mp and Away We Go” The initial side effects were terrible…nausea, vomiting, hair loss, weight loss, weakness, fatigue…just to name a few. But eventually, I got used to it and felt alright. Meaning, I wasn’t crapping my pants in public and stuff like that. I felt like I had some semblance of my life back. My energy was good, I stopped puking, I felt pretty stable for the first time in a long time!

Around January ’13, I started having issues with my poop DR. I was no longer receiving the level of care I needed, so I dumped him and found a new DR at the University of Michigan, that I trusted and continued on 6mp. All was good for a couple of months, until… I had a colonoscopy in April ’13 which showed increased inflammation throughout my entire colon!! 6mp wasn’t doing the trick. I was really upset. Things were pretty bad in there and I had high hopes for 6mp. My DR urged me to begin Remicade treatment since 6mp wasn’t working and I was/am at risk for cancer or perforation of the colon, irreversible joint damage, blah blah blah…it all scared me enough to try something even scarier. I never thought I would turn to Remicade, but here I am.

My first infusion was two days after my 32nd birthday, July 23, 2013. I was so nervous and actually had thoughts of running out of the infusion center screaming and crying. I didn’t. I survived round one. I just had my third infusion on September 3….which was my kids first day of school! How awesome is that? :( There is definitely a dark cloud looming over me called Remicade and the thought of taking this drug/poison is quite honestly terrifying.

At this point I don’t know what else to do though. I want to at least give it a try for a little while…but I keep expecting something “bad” to happen. I’m trying oh so hard to stay positive, take it all one day at a time, be good to myself and all that. But I feel lost. And at times, angry.

6mp 50 mg as well as Remicade infusions every 8 weeks from here on out.

DR wants to keep me on 6mp for a few months to give Remicade a chance to start working, and to “fall back on” in case I develop antibodies or become allergic or whatever.

So far my side effects have been tolerable? I guess? I still have ups and downs, good days and bad. Probably more good at this point though. I am, however, tired of feeling so achy all of the time. Remi is supposed to help that too, but so far it seems worse. Anyone have any experience they’d like to share? How long did it take for Remi to start working for you? What side effects did you/do you experience while on it? Where is the light at the end of this LONG DARK TUNNEL?

I am 31 years old, mommy of two lovely girls. Diagnosed about 6+ yrs ago. I love cooking and spending time with my babies, boyfriend and family. Going to the beach is cool…assuming there is a toilet nearby ;) I live near Detroit, MI with my boyfriend, two daughters, dog and three cats.

13 thoughts on “I’ve Gotta Get Outta This Place”