It’s All About PMA (Positive Mental Attitude -in the end!) 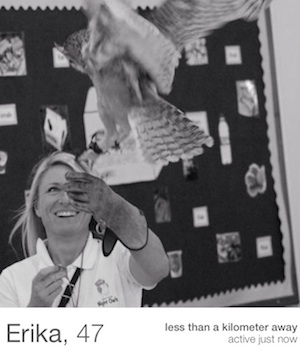 Hi my names Erika, I’m 48, single with three kids, 15, 12 and 10. I have a job working with owls which I love, am very active, constantly at the gym and have completed a couple of Tough Guy Challenges.
I don’t get ill….EVER!

In September I started symptoms of bloody poo, went to the doc he ordered a colonoscopy. After I was sent home with a diagnosis of resolving proctitis. I had no idea what that was or what to do about it. A week later I called my GP, the secretary looked at my notes, said I’d been diagnosed and didn’t need to see the doctor again! I broke down in tears on the phone, told her I was pooing blood and had no idea what to do about it!!! Eventually saw GP who referred me back to hospital, my appointment came through for three months time.
Obviously couldn’t wait this long so went privately, saw doc at hospital within the week, he said take these steroids and you’ll be fine in a couple of days, I wasn’t!

Had another colonoscopy where Dr Bray told me I was unlucky and it had spread and now I had colitis. I was sent away with a foam, some Azathioprine and Mesalazine, I thought I was cured.

First couple of weeks fine but no change, then lots of changes.

Toilet issues resolving from one end but…..!

Sick constantly, stomach cramps leaving me unable to do anything, I stopped taking them on 29/12/14, felt instantly better.

Expecting my bloody poo back but no I seemed a lot better and was happy.

So my next follow up appointment 7/01/15, I went in with a bounce in my step as I felt so much better after ditching the Azathioprine.

Told doc how I felt, he said my liver function test had been abnormal and I had no choice but to come off the med but now I was a prime candidate for surgery!

Upset, angry and determined not to ever have surgery I left the hospital, next day had a flare, due I’m sure to the stress of seeing him!

It’s All About PMA (Positive Mental Attitude -in the end!)

And hoping to see results, I have a hospital appointment in 4 months and am determined to go in there and show him that diet can help and that he should never have written me off!!

My diet proving difficult and a little contradictory to what I read about colitis so have ordered Adam’s books and am waiting to download (when my laptop repaired!)

She did say however that I am allowed vodka, in moderation, I don’t generally do moderation!!!! Vodka with cranberry juice and soda water is the only way I’m allowed to take it but hey it’s lovely ;-)

So having colitis has had a massive effect only life, I’ve gone from a single, carefree, lairy, happy 48 year old woman in August, to a depressed hermit, crying herself to sleep in October, back to an ‘i’ll show you’ determined to beat mainly the doctor if I’m honest but also obviously the disease woman in January.

He may not have known it but by writing me off as surgery material this doc has pushed me back to the old determined, never give up Elz that I was when I ran in sub zero temps across muddy fields and through obstacles getting electric shocks! It was fun believe me!

A little annoyed at the treatment really, how can you be told when you’re on your own, within five minutes of seeing the doc that you’re going to have to have a pouch? I mean surely he should have been a little more concerned about my emotional health as well as anything else?!

I have friends around me but they think I should have the operation, I’m single and feel I’d always be single if I went down that route. I’m proud of what I achieve in the gym and am proud of my flat stomach, I still love a bikini and sorry but really don’t want the operation.

At the moment I’m taking Octasa and herbal supplements Turmeric and Milk Thistle along with L-Glutamine and probiotics.

Really would love to hear from anyone who understands. Especially in the uk.

I’m a glass half kinda person and know we can show the docs that they don’t know absolutely everything, it’s all about PMA and mine is back big stylee! Rollin the rest of the year xxxx

I’m 48, single with three kids, 15, 12 and 10. I have a job working with owls which I love, am very active, constantly at the gym and have completed a couple of Tough Guy Challenges.

5 thoughts on “It’s All About PMA (Positive Mental Attitude -in the end!)”

previousUC Found During Pregnancy
nextWhat Effect Does Ulcerative Colitis Have on the Brain?