Is the SCDiet Making Things Worse Instead of Better? 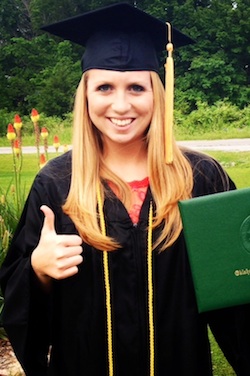 I am a 23 year old newlywed and new grad nurse diagnosed with UC Feb. 3, 2014 just one month after my 23rd birthday. My colonoscopy showed pancolitis.

I’m very critical about myself. Always wanting to do better, always wanting to be better. Although this can be a pro when it comes to being a nurse, it can also be a con because I beat myself up too much when something goes wrong.

Is the SCDiet Making Things Worse Instead of Better?

I am a 23 year old newlywed and new grad nurse. Just one month after turning 23 (Feb. 3, 2014) I was diagnosed with UC. I was in shock with the diagnosis since I have always been an active person and ate reletively healthy.

My symptoms started back in November of 2013 and included bloating, mucus, and bloody diarrhea. My husband finally convinced me to go to the ER to get checked out. The ER doc came in, felt on my stomach, and said, “with someone so young, when we see bloody diarrhea we just suspect an infection” and sent me on my way with antibiotics.

In January of 2014 I finally made an appointment with a GI doc and he set me up with a scope right away. Just as the doctor suspected, I had UC, pancolitis in fact. After my diagnosis, although I got depressed and scared for my life, I became determined to live with my colon for the rest of my life, but didn’t want to rely on meds in order to do so. I did so much research in the following days and came across the SCDiet. I just had to give it a shot.

I wasn’t able to fully start the diet until just last week as I had not been able to get the yogurt maker, which is a staple item of the diet. Before I started the diet, I was eating low residue/low fiber, rarely had any red meats, cut way back on my bread intake, and also switched to soy/almond milk. During this time, my symptoms had become few. I was also able to ween off my prednisone and continue to take my Asacol 3200mg/day. I noticed that the blood had gone away and I was actually having formed stools! This got me excited to really dive into the SCDiet thinking that it was really going to work for me. Well, that unfortunately hasn’t been the case. Since I have become strict SCD and have actually been following the intro diet, my bloody diarrhea/mucus/bloating is back! Not as bad as it was before diagnosed, but it’s still there and it’s so frustrating especially when I read so many success stories of how people’s symptoms were gone within days. I am currently back on my prednisone and on day 3 of the intro diet and not really seeing any relief. I really want to give up and go back to what I was doing right after my diagnosis, but I also want to become medication free in the future. Am I doing something wrong or is this diet just not for me? Help!

“Is it normal to be experiencing a flare up after starting the intro SCDiet? ”

Like everyone else who shared before you, thank you for letting us know how things are for you right now.  It is not normal to experience a flare up after starting SCD but that’s not impossible either.  At the end of the day, we are talking about UC here, and unfortunately, just about anything is possible.

But, there are some techniques that seem to work best for people when getting into the diet changes that can eventually help the gut bacteria get to where it needs to be.

One of the major things is sticking to the program 100%.  It’s not easy, and not everyone does it, but by making sure the tempting foods such as breads, grains, and dairy stay away from the mouth completely is often key to success in the early days.  Heck, the grains and breads should be off limits for ever as far as I’m concerned.

One thing that I think raised a red flag to me when reading your story above is your mention of not starting until you got your yogurt maker.  I personally get very worried when people tell me they are making their own yogurt during the early days of starting SCD.  Reason being is too many UC’ers have had negative reactions to the yogurt because they have added it into their diet WAY TOO EARLY.  Let me repeat again, WAY TOO EARLY.

Looking at the big numbers here, I think it is very safe to say that adding the yogurt only after symptoms have resolved is the most beneficial way to go about things.  And even when adding it, doing so in VERY small amounts.  When I started SCD I didn’t have any yogurt for many many weeks, heck maybe even 5 or 6 months before I made yogurt for the first time.  And when I did, I started with a super small amount.

So with this said, I’m not sure if you are eating your yogurt or not, but I’d wait on that a while.  Your colon can heal without yogurt.  That’s for sure.

Besides all this SCD talk, one thing that comes to my mind right away is a simple thought.  If you had some great success with the low residue eating you mentioned, that’s GREAT TOO!  At the end of the day, feeling good with symptoms going away is the goal here.  And if you are happy with the progress that you made, well…that’s the goal.  Might be worth a second round.

Don’t let this UC get you too down though.  The first year after diagnosis is always the hardest.  You’ve got your whole life ahead of you and UC will only play a minor part.

I am a 23 year old newlywed and new grad nurse diagnosed with UC Feb. 3, 2014 just one month after my 23rd birthday. My colonoscopy showed pancolitis.

5 thoughts on “Is the SCDiet Making Things Worse Instead of Better?”

previousCursed? Think Again…
nextI Was Going to the Bathroom 35 Times Per Day