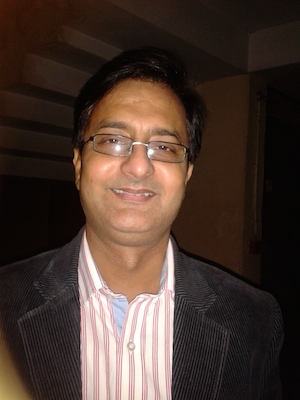 I love being with people and having fun with my family.

I have frequent mood swings and been bleeding for quite a long time. Have lost weight too as it happens with most people with this disease.

Hats Off to UC’ers

Greetings to Adam and all. I am writing from New Delhi. I am 45 years old. I am a patient of ulcerative colitis since 2002. I am into business. Initially I started having stomach trouble in the form of diarrhea and severe irritation in the stomach. On the advice of my brother in law we started showing to family doctor who put me on heavy medication but to no avail. My wife got very worried and insisted to go and visit a specialist. We went to a super specialty hospital where full colonoscopy disclosed ulcerations of the big intestines and I was declared in love with Pancolitis! I was put on aggressive treatment of steroids and Mesacol medicine and after couple of months my condition stabilized. For a year or more I continued with the medicines and gradually stopped taking it. In place of it I started taking food supplements. I continued with my life in remission since then.

In 2009-10 I started having some irritation of the bowel and seeing that I restarted Mesacol. In 2012 I had partial colonoscopy which revealed the ulcers again. I was put on steroids for about two months and I responded well. But after that I had a flare. Then losing faith with the allopathic medicines we started holistic medicines for almost a month in January 2012. After seeing no result we opted for homeopathy in Feb-March 2012. We had an immediate result with it but unfortunately, on my insistence the homeopathy doctor completely stopped allopathic medicines. As a result of that I had a severe relapse in July 2012. Nevertheless we continued with it till Jan 2013 and seeing no improvement we stopped with them. In mid 2013 I had another colonoscopy which showed Grade IV status. Consequently I was put on 40mg steroids and full dose of Mesacol in July 2013 and continued on steroids for approximately for seven months or so. I was also given immunosuppressant Azoran 50 with the full dose. Meanwhile we also went to couple of ayurvedic doctors and took their medicines but had no result in the stopping of bleeding which has been continuing all along for last two years till date.

The form and quantity of blood varies. It is more in the morning and less in the day and night time. For the last month or so I am having disturbing sleep too. I get awaken with the urge to go to the toilet in the middle of the night or very early in the morning. Some days are better when one gets the feeling of getting better and on another it is completely otherwise. In end May 2014 I restarted the homeopathy medicines. I am more or less very particular with my all medicines. The food which seems to be more palatable to my gut is rice and anything which is light. I am not able to lead a normal life because of this disease.

The allopathic doctor who has been working on me has been a great human being. First he suggested me to go for Infliximab then later on he came up with the idea of FMT. Since it was a very new kind of treatment in India he had to work hard to get it approved in his hospital. Finally we went ahead with the first cycle of it in this month only. And with great joy I have to inform fellow UC sufferers that I have achieved a great result. In terms of physical discomfort it is almost 80% better and there is 50% reduction in frequency of stools. This automatically has reduced the bleeding also. We are waiting for the next cycle of it which is due at the end of this month. Mine is among the first FMT case in India. I am also planning to start my blog to help millions of UC patients in India as well as outside. Unfortunately in my country there are no statistics of UC sufferers. This might be a good help to them.

And lastly, thanks to Adam who has done a great job of uniting so many UC sufferers at one platform and helping them everyday with so much of information and suggestions. Thanks again bro.

I am a husband, father and an entrepreneur from India, aged 45 years. I am fun loving and friendly guy. I am a UC patient for the last 12 years.