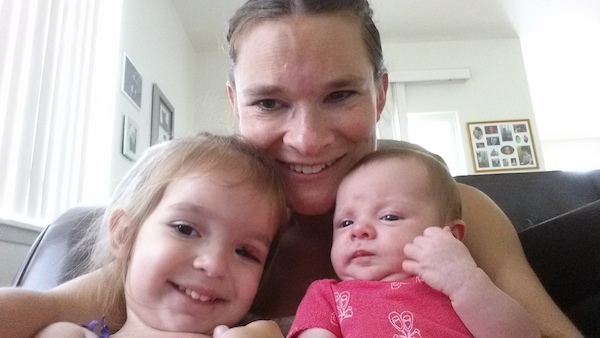 I was diagnosed in 2001 with this disease and have had ups and downs over the years. I started out as a mild case but in 2009 turned into more of a severe case. I have had about 6 colonoscopies and have been on several meds.

Some more about Kimberly:

So…I have two beautiful daughter-my favorite thing about myself. My biggest and best accomplishment. A 2.5 year old and a 3 month old. After the 2.5 year old I had such a bad flare I wondered if I could ever have a second baby. Here I am with a newborn and life is wonderful!

I am married to a wonderful husband. He is in the marines so we move a lot. Our current location: Hawaii!!
I also have a doberman and minpin. A great family and I am one lucky gal. I even get to stay at home with my girls. They keep me very busy.

I like jogging but I haven’t gone in forever! Still trying to adjust to this whole second baby thing.

I am pretty well under control at the moment! Occasionally I may have a day where I feel “flareish”. Maybe 2 to 3 extra bowel movements that day. But no blood or major pain or diarhea in quite some time and normally only 1-2 bowel movements a day!

Guys, I have posted my story in the past. At the time I was really flaring and wondering about baby 2. I just wanted to update that I did indeed have my second baby and yes I did finally get better!

I also wanted to say, I was able to get off remicade, which was another goal for me. I wasn’t sure if that was ever going to happen!!

My bad flare finally ended in Sept 2012, when I went on remicade. I was in close to remission on remicade. But I hated being on it, I hate the weaker immune system thing and the risks involved. In October 2013 I found out I was pregnant! Still on remicade at that point. I took it until I was 26 weeks and then stopped with the ok of my doctor. So at that point, I was only on my other medication which is lialda, 4 per day, canasa as needed, and I take my daily super probiotic ultra flora (thanks Bev). I was scared that I would flare without that remicade. But I didn’t. And she was born July 1. Still 3 months later I am still ok. Not perfect but ok. And I hope to not have to do pred or a biologic again. Ugh.

At the end of my pregnancy, my wonderful best ever GI doctor left. So I was seeing another at the same office. He wanted me to go back on remicade one week after birth. But the remicade nurse said no. You have to heal first, wait 6-8 weeks. So I did. Then I went back to GI but saw a nurse instead of the doctor. She was very pro breastfeeding with less meds and she was very the less medication the better, unlike the other guy. I was so happy. She supported my decision to stay on only lialda and canasa. And here I am.

I do worry I will flare again. It is apparently very common to flare after birth and stress ect. So I’m almost waiting for a flare to start. How do I not do this? It makes me stress even more. But for now, all is well, so glad I have my girls. :)

Asacol-several years, replaced with Lialda. Works ok
Canasa-for when I start having a little symptoms, take it as needed, it helps.
Probiotic 50 billion-think it helps
have taken L-glutamine powder, stopped during pregnancy and breastfeeding only because effects are unknown.
Imuran-bad side effects-hair loss-yuck.
Prednisone-worked for a few flares but last flare did nothing. Awful side effects
Remicade-worked well, would start getting symptoms back between infusions. towards the end was not working as well.

Hi! My name is Kimberly and I was diagnosed in 2001. I have a great husband and wonderful daughter, 20 months old, along with a doberman and miniature pinscher.

previousNew to this World!
nextI Hate My Guts