Tonight we made some dinner, it was tasty!:

Halibut pan fried in a little oil and a tiny bit of butter, then put in the oven.  Also, sauteed some mushrooms and bacon pieces(put that atop the fish once it made it to the plate)  And a salad of mixed greens, spinach, cucumber,tomato, pine nuts, and some balsamic vinegret dressing.  I turned the pepper mill a few times as well. 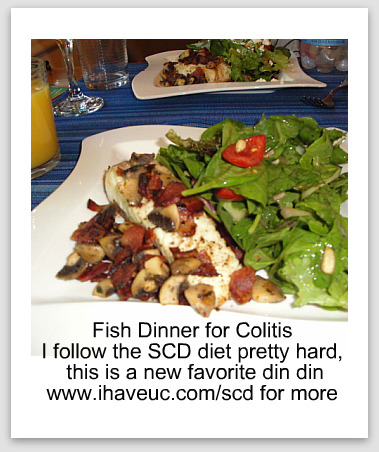 I am guessing that if you want to attempt something like this, you will probably like it too.  Even if you don’t totally enjoy fish too much, if you throw in some of the bacon bits you are going to think its breakfast time again!  I love that bacon.  Of course if you do like fish alot, this is pretty tasty for you too.

If you are new to the site, my name is Adam, I write here quite often, and throw up random dinner shots.  To be fair, I have to admit that my wife made this entire meal, other than me putting the salad together for a while before getting distracted with nothing in particular.

But, one thing is for sure, I do have ulcerative colitis and I hope this site answers some of your questions.  I was very sick up until August 2009, been through tons of medications and was heavily contemplating surgery.  I mean, had already talked to surgeons you know.    But, somehow, actually via a family friend, I was introduced to a new way of eating.  the SCD diet actually.  There is a section above on the site about this if you want to read more.  And, over time, I became drug free and pretty much symptom free(save a few liquidish stools here and there, and a mini two week flare back in early June).  As far as medications, I am on absolutely none.  As for doctor’s visits this year, zero as well.  And I’m pretty proud of that.

What bothers the heck out of me though, is that not everyone who tries the diet has the same success as I have(I wish Vicki was getting all the energy she needs to bike with the SCD too!).  Quite frankly, it really pisses me off. I don’t know if I should be angry at the diet, or the colitis itself.  But, never the less, I still feel the need to write about how things are working for me, in the hopes that it might inspire, or at least open the eyes to others.  Especially those who want to try an alternative form of treatment which won’t kill your pocketbook, surely won’t buy your GI doctor a new set of shoes, and won’t wack you down with side effects.  Just straight up diet changes.  Nothing special, no mysteries.