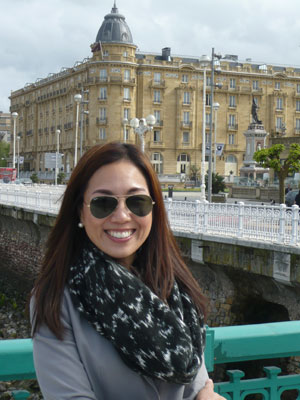 I was diagnosed with UC, January 13, 2015 immediately after my colonoscopy. My symptoms started to appear the previous year, first in July – blood was present in my stool for one week, and then it went away. My second flare-up happened in October and it lasted for 3 weeks. Still I ignored it, I thought I was just stressed because I had houseguests. The third flare-up was December and by that time I said, “That’s it!”. I needed to have this checked.

Some more about Demi:

My ethnicity is Filipino (I’ve yet to meet another Filipino with UC, it’s quite a rare illness in our country!). I’m generally healthy – prior to being diagnosed with UC, I’d wake up early to stretch, drink warm water on an empty stomach for cleansing. I have a balanced diet and avoid processed food as much as I can. I typically put in 10,000 steps daily in my pedometer, drank 8 glasses of water/day. I used to treat myself to a daily glass of wine and some fruit and cheese prior to dinner. Love trying new restaurants. I don’t get enough sleep – I only get 6-7 hours a day.

I’ve been free of symptoms for the past 8 days (Whew! Keeping my fingers crossed).

Growing up, I remember my stomach was sensitive to sudden weather/temperature changes. If I stepped into a place that had terribly cold air-conditioning, it would trigger a bowel movement. When I was a teenager, I had a crush on my classmate and every time I would see him around campus, I’d get butterflies in my stomach and it would also trigger a bowel movement (thankfully I was over him after a week). I thought these episodes were normal but now that I have been diagnosed with UC, I wonder if there were earlier signs that I may have ignored.

I now have to be prepared anywhere I go in case I ever need to have a “restroom emergency” (at my worst I had 7 BMs a day). My emergency kit includes wipes, hand sanitizer, Poo-pourri Before-You-Go Toilet Spray (you can get this from Amazon, it’s amazing in managing odors).

I’ve had a sigmoidoscopy and a colonoscopy one month apart. At first my GI thought I had Crohn’s but after my colonoscopy she confirmed that I have left-sided colitis. As far as the colonoscopy I used Prepopik which tasted like lemon soda. Five days after the procedure I had painful cramps, I was gassy and my stomach made strange noises. I was assured this was normal and true enough after a week, it all went away.

I have a supportive husband who does his own research about UC, he helps me prep my food and he eats the same things on the FODMAP diet. We have cleaned our cupboard of junk and now check food labels diligently. I have my share of family and friends who throw different ideas and treatment options and it can be quite overwhelming but I know it’s their own way of showing they care.

I’m hoping that my condition does not get worse than it’s current state. I can’t imagine how I’d be able to work if it did! I also look forward to traveling more with my husband, I hope my UC doesn’t get in the way!

I am currently on Apriso. Also taking Bio-K Probiotics, Fish Oil and Vitamin C supplements. During my first 3 weeks of being diagnosed, I removed dairy and gluten from my diet. Now I am shifting to the FODMAP diet (so far, so good). Still contemplating on whether I should try the Whole30 (Paleo).

I was diagnosed with UC, January 13, 2015 immediately after my colonoscopy. My ethnicity is Filipino (I’ve yet to meet another Filipino with UC, it’s quite a rare illness in our country!).