Fighting Through My Life With Ulcerative Colitis 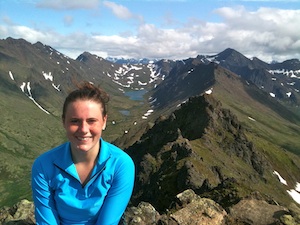 Hi!, My name is JA, I am 21 years old, I was diagnosed with UC when I was 15. I am from Anchorage AK, I love being outdoors, I ski, hike, fish, run, swim, play soccer, and anything active really. I currently attend college at OSU and am hoping to get into Pharmacy school.

Relatively recently (within the past month) my symptoms have gone into remission for the first time since being diagnosed 6 years ago.

I guess I will start from the beginning, when I was 15 I started seeing a lot of blood when I went to the bathroom. After about a month I told my mom about it and we went to see a doctor. A referral to a GI and a colonoscopy later I was diagnosed with an incurable disease…bummer. As I said in my bio I am super active I loved running and the UC didn’t affect me too bad in high school. The doc put me on Mesalamine (rowasa and asacol) and that seemed to do the trick for a while. But I hated taking the enema and any time I missed a does I would start bleeding even if it was only a day. But being what I was (a fifteen year old girl in highschool) I ignored the blood because it didn’t really affect me that much anyway, I had no urgency or pain, I figured so what if I bleed a little bit. I still could do all the sports I wanted so I wasn’t concerned with my long term health.

Unfortunately in college it progressively got worse as the years went on. I tried to push through it but it didn’t work. I switched GI’s twice and started going to a special GI clinic near my school where the doctors seemed a little more helpful. Between my sophomore and junior year of college I had four colonoscopy’s and each one had worse news. I tried every diet under the sun but nothing seemed to work. I still tried to work out but I was unable to even really go on runs by the end of my junior year because I needed to use the bathroom so much. I couldn’t even sit through a test. I had to register with my school’s disability services to get a special testing set up for me because it was getting hard for me to sit through exams. I also lived in my sorority my sophomore and junior year and I would get up at 5 am sprinting to the bathroom because I couldn’t even get through the night. The doctors put me on predinisone but it didn’t have much of an effect and I have been off and on for about 3 years. I have also tried flagyl twice and I am pretty sure both times it made my symptoms worse.

Worst of all I could barely get to college because it was so stressful for me to fly because I didn’t know when I would need to use the bathroom. This last summer it was the worse it has ever been. I work as a pharmacy tech at an intravenous pharmacy clinic over the summer and many days I couldn’t make the drive home without having an accident. I would constantly have to get up in the middle of compounding medication to use the bathroom. I was so fatigued from the anemia I was constantly living with I was tired all the time, I honestly still don’t know how I got out of bed half the time. Sometimes I was stuck on the couch all day with stomach pain, severe cramps, diarrhea and fatigue. I would still go on hikes but would be using the bathroom constantly and would always be tired and dehydrated. I was constantly worried about where a bathroom was, even if I was just walking my dogs. No matter what people say it’s embarrassing to be consistently worried about where the bathroom is and makes you not want to hang out with people. I couldn’t go on trips with my friends. It was hard for me to focus because I was so tired. Basically I couldn’t be a normal college student, the supposedly best years of my life were turning out to be the most stressful as my health slowly deteriorated. My doctors were trying to get me Humira for about 5 months but my insurance didn’t approve it even with the 2 appeals I sent in. After accepting the fact that I would never get Humira I agreed to try the remicade even though I was very reluctant, because none of my previous medication have worked.

I have now had 2 infusions of remicade and it really ended up being a miracle drug for me. Within three days my symptoms went away, I am talking no blood and only going once a day. This is from tons of blood with upwards of 10 bathroom visits a day. I no longer am on the lialda and I am tapering off of the prednisone. Its hard to believe I lived every day like that for all those years and still managed to get through college (barely) and do everything I did. I still don’t know how I managed it, I just didn’t want the UC to control my whole life and I fought it every step of the way. But I was tired of fighting and I can’t even begin to explain the relief remicade has given me. The three hour infusion time is a drag but it is nothing compared with all the time I spent in the bathroom. I also see the irony that all these years I have been mixing the medication for other people which could have given me the relief I was so desperately craving. But now that I have it, it has given me my whole life back, I can run, swim, hike, and go for road trips like a normal college kid! Its my senior year and I have never felt better, I hope the remicade continues to work and I am happy to talk with anyone, I know how lonely it can be, I never talked to anyone about my symptoms and I think that was a mistake.

Graduating college, going to pharmacy school, and still no UC symptoms! Off of the prednisone for good!

I’m from the huge state of Alaska and I started seeing symptoms of UC at age 15. I’ve been diagnosed for over six years now.

11 thoughts on “Fighting Through My Life With Ulcerative Colitis”