Everyone has a chance for a Wonderful Life with UC 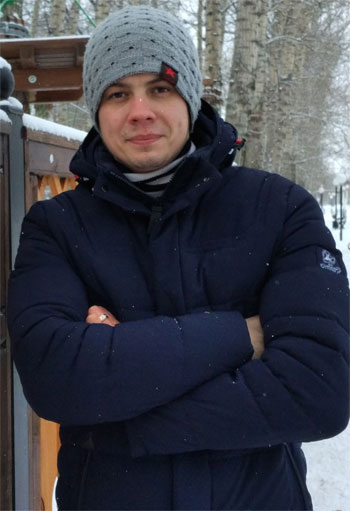 I am interested in computers, cars, photography, music, sport. And I also work at the milk factory :) I am from Russia and in our country there are many people with ulcerative colitis or Crohn’s disease. And we have very expensive drugs.  ( My site in russian language about UC and CD – www.unspecific.ru)

At the moment I don’t feel like a sick person. However, in 2013, I literally could not get out of bed due to low hemoglobin and a large blood loss. In today’s time I go to the gym, restaurants, pool, etc.

Speaking generally, to the disease in my nature was present excessive emotionality. No, I did not run or jump like a frantic, not crying and not whinnying at the slightest provocation. However, criticism of me, slightest altercation with other people (even within the Internet) knocked me off balance, causing time to think about what happened and relate to the situation, so to speak, too seriously. All this has led to the development of neurodermatitis and seborrheic dermatitis, causes which are just the same as the systematic stress.

My teenage years can be called the statistical average among young people 16-20 years old: there were alcohol and cigarettes, and interesting company. In 2011, in August, I gave up smoking later, somewhere in four years’ time. ” No difference in well-being noticed. Why I quit smoking? Yes, just like that, absolutely no reason any and motivation. The appearance in 2012 marked the first drops of blood, oddly enough, a complete indifference. Well, the blood and the blood, it happens. I thought that from the long sitting at the computer, and therefore began to run at the stadium. In the end, I went to the proctologist only eight months later, approximately, when frequent trips to the bathroom up to 5 times a day, mostly unformed masses. In January 2013, the first in my life sigmoidoscopy was performed, the results of which I was diagnosed with “Erosive Proctosigmoiditis”. At that time I did not know that this is the most that neither is the NUC, so do not betray it du e importance, still all too serious to treat this situation.

I believe that picked up in April of that year, while salmonella and hurt me and saved. So “until victory” I would have stayed at home. The result of treatment with huge doses of antibiotics have become liquidated salmonellosis and the total defeat of the colon.

Now the attitude to what is happening around and in relation to me, if not diametrically opposed, then definitely very different from what was to ulcerative colitis. In most conflicts do not pay attention, giving himself mentally to understand that the “game were not worth the candle,” Why do I prove to man the point of view with regards to the current situation, if the chances to reverse his thinking tend to zero? I have everything you need to be happy: a family, a good job, a hobby. Well, small health problems, but it is fixable. I even now rarely soars, who would think about me. But I also love good music. And I’m also influenced by nostalgia, alas. It is, in fact, not very well. But the music makes my thoughts go back to his childhood, remembering those feelings and those people who will not return. Zemfira, Kukryniksy, Aria, The King and the Clown, Green Day, DDT … for a long time to enumerate. Digress.

In the end, I want to say that I have no regrets about what happened to me. UC has helped me reach the next level, to bring me those traits, which I lacked. The world was a bit different than I expected.

Medications and Other Treatment’s Artem’s Is Up to Now/Previously:

My ulcerative colitis came to me in 2013. To be more precise, the total defeat of the colon. I now feel great and live a full life. Oh yeah, I haven’t been through the surgery.

My site in russian language about UC and CD – www.unspecific.ru