Doctors: The Good, the Bad, the Useless 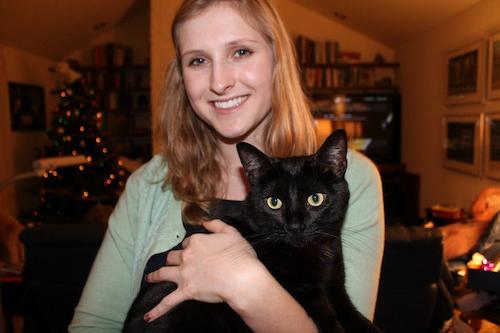 Alicia with her kat!

My name is Alicia and I live in California with my pet fish and mice who keep me company for those days when I can’t stray too far from my bathroom. I was diagnosed with left sided moderate Ulcerative Colitis in March 2012.

Some more about Alicia:

I’m a 22 year old undergraduate at University of California at Davis. I study cultural anthropology and psychology and am working toward B.A.s for both the subjects. I spend a lot of my time reading classic novels, my favorite being Wuthering Heights by Emily Bronte. I love reading books about romance and drama because I’m amazed at the emotional roller coaster they can take me on from anywhere I’m reading. I also have a passion for British T.V. shows because I firmly believe that some of the best show writing talent is in the UK.

Currently I am in remission and have been for 5 months. I have 1-3 bowel movements a day and only very few of them are urgent (as in race to the bathroom in under 2 minutes urgent)

Doctors: The Good, the Bad, the Useless

When I was diagnosed with UC, I thought that was the worst thing to ever happen to me. An auto immune disease that required expensive medication for the rest of my life? I was 6 months away from the end of my insurance and no money for meds or a GI. Luckily my community college hooked my up with a clinic which offered very good insurance for low income families. However, the cheapness of the plan cost me quality care and a lot of time. I had to wait 2 months for an appointment while I was in a bad flare up. I waited 4 hours to be seen by a different GI every visit and they spent most of the appointment asking me about my medical history. It was so frustrating! They wrote down what I said, but none of them ever bothered to read what the GIs before them had written in my file.

I was put on Asacol, but after a month, I found that I couldn’t keep any food or water down. I lost 20 lbs in two weeks before I risked stopping the meds (remember, I didn’t have immediate access to a GI to consult). I was eating again soon after that and later put on sulfasalazine. After a month, I started having really bad chest pain that escalated quickly. I went the nearest hospital and they scanned my chest, but found nothing and decided I must have acid reflux. They gave me a dose of morphine and sent me on my way, despite my protests of pain.

Twelve hours later, I was in more pain than I’d ever been in my life (including from bowel movements) and I asked my Dad to drive me to the second closest and hospital which happened to be Stanford. They saw me right away and soon admitted me. I was diagnosed with pericarditis, which is an inflammation of the sack around the heart. A doctor told my dad that if he hadn’t brought me to the hospital, I would have had a heart attack within 24 hours, possibly fatal. I swelled up with water weight and gained 35 lbs even though my diet consisted solely of supplements, dilaudid and sugar water. I went into shock a couple times when given new IVs and sweat so much that the nurse couldn’t tape down the IV until I was out of shock. I was given a blood transfusion and an emergency pericardiectomy, which is a procedure where a long needle is inserted into the pericardium to suck out the fluid so the heart can expand to take in blood normally. I was severely anemic and lacking so many vitamins that I was told I had a 20% chance of dying on the operating table as it’s apparently very risky to anesthetize and poke at an anemic person’s heart. the procedure was successful and today my heart is fine except for occasional twinges. I also went into remission because I ate nothing to poop out and my colon healed.

I could have died at 20 years old due to an allergic reaction to the sulfa in sulfasalazine because of the incompetence of ageist hospital employees who scoffed at the idea of a 20 year old having a serious heart condition. I didn’t die because I KNEW something was very wrong and some competent doctors believed and cured me. After that, no GI clinic would touch me. Sure, they let me have “check-ups,” but well after I was given the green light to try other UC meds, no doctor would risk a possible law suit over a clinic patient who was in remission.

A year and a half later, I tranferred to UCD as a junior and was offered a decent insurance plan by the school and loans to help me pay for it. I immediately found a GI recommended by a nurse whose own daughter was a patient of said GI. I got an appointment within the week and was prescribed medication for my second flare up immediately. No longer do I need to worry about waiting for an appointment. My GI knows my name and has never asked my medical history more than once. He knows everything about my UC and is just as disappointed in the previous care I have received from GIs as I am. He recommended Humira, which I take with biweekly injections.

I realize that this story has less to do with bloody poops, stomach pain and embarrassing colonoscopies (though that seems to be half my life these days) and probably few can relate to this. After all, my doctors only had a couple case studies as a reference for my reaction. The point to this story is that you can’t trust doctors all the time. Someone once told me he wanted to be a doctor and when I asked if it was because he wanted to help people he said, “If a doctor wants to help people, he works in a third world country. Being a doctor in the US is about money.” I don’t believe this to be completely true, but this conversation replays in my head every time I talk to a doctor. What this taught me, and ultimately what my experiences taught me, is that we need to be critical of every choice a doctor makes because our bodies reflect that choice, good or bad. Do research, use your common sense, THINK about what your GI is recommending and don’t be shy to voice your concerns. The American healthcare system can be VERY messed up, and as people suffering from IBD, we have to interact with the system more often than most people. Know you s**t, literally and figuratively.

-Hi Adam,
Thanks for the website, it’s nice to have a community where everyone is OK talking about poop.

I live in California with my pet fish and mice who keep me company for those days when I can’t stray too far from my bathroom. I was diagnosed with left sided moderate Ulcerative Colitis in March 2012.

1 thought on “Doctors: The Good, the Bad, the Useless”

previousMy Story and I’m Sticking to It
nextRemicade Around $10,000 Every Two Months, Is it Really That Expensive?