Diet and UC – I’m Recoverying From My Second Flare 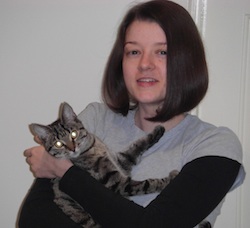 Here’s a photo of me and my kitty, Oyster – who I found about a month after being diagnosed. We spent many almost happy days together on the bathroom floor!

I have been following the SCD and GAPS diet since April 2010. I’m in a good place now, though not yet in remission.

Diet and UC – I’m Recoverying From My Second Flare

I’ve had UC since mid-2009, and have written a couple of stories on this site about my two flares. The first one lasted almost two years. The most recent one started in Feb 2013, and is largely under control. But this post isn’t about that, it is about my most recent visit to my naturopath and GAPS practitioner.

I’ve been following SCD and then GAPS diet religiously since I started it in April 2010, apart from the last 6 months before my most recent flare, though I was still mostly good.

As the current flare ramped up, and I didn’t have any success getting it under control by doing the intro diet again, I decided I needed some help and decided to see if I could find a GAPS practitioner and discovered a naturopath. She is awesome. Despite just having had a baby when I first called her, she fitted me in very soon after, and gave me lots of advice by email in between.

She is just back from a UC masterclass and called me straight away to say that she has some awesome new info about diet and supplements. So I thought I’d share. These are the basic recommendations (they are not all GAPS/SCD legal):

I’ve got a huge list of references that support the recommendations (tiny font and in image format, so I can’t copy and paste it – I’m in the process of typing them all out, and seeing if I can find them online – I’ll can provide the list when I have finished if people are interested).

She is also recommending that I get blood tests for inflammatory markers every 3-6 months.

I only started this 4 days ago, and have successfully added 3 tsp of flax seeds over the first 3 days, and started chia today. It’s impossible to say whether it is doing any good, but it hasn’t done any apparent harm.

My goal is to get off all of the medications once I’m in remission, which hopefully isn’t far away!