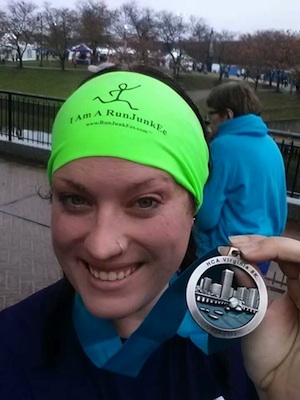 I am 33 years old and was diagnosed in March of 2000 with UC. I am one of the oddball, overweight UC’ers who doesn’t feel like I am “cursed” because of my diagnosis.

I am the captain of a running team that wears TuTu’s when we run. I try and be a positive influence to everyone around me even though I am always in pain. It isn’t always easy, but it makes the day go by faster and makes me happy to be a positive advocate for UC.

In November of 1999, my dad died from colon cancer. He died within just a week of diagnosis. He probably had symptoms, maybe even had IBD, but was one of those guys who just didn’t go to the doctor much. So there I was, 19, scared, angry, sad and generally pissed at the world and I was hiding something. I had been having stomach pain and loose stools, with blood, for awhile (months, a year, I don’t fully recall) and my mom told me she was done “playing by my rules” and dragged me to the GI during my college spring break. They got me in for a colonoscopy that week and I was diagnosed with UC. Awesome, my friends were at the beach and I was having a camera shoved where the sun don’t shine.

I am not one of the thin, frail, “something is wrong with them”, sick people. I have always battled my weight and with this new diagnosis, I was depressed, ate the things that didn’t hurt, basically carbs. I gained more weight. When I came home from school, my original GI, a young Patrick Swayze look-alike, had stopped practicing and gone into research. Great, needed to find a new guy, who at least had a sense of humor, but that didn’t happen. New doc was a jerk, at first he didn’t believe I had UC since I didn’t look like most of his patients. Awesome (insert eye roll) Next came colonoscopy number 2. Guess what?!?! I still had it and the meds I was on, weren’t doing the trick so he started talking about ostomies. Lemme tell you, I hightailed it right out of his office and never looked back. I was 20 now, in the prime of my life, I would figure it out, but I would NOT be pooping in a bag (he wasn’t very good at explaining these, but I k now now ostomies are not the end of the world) So for 10 years, I smoked a lot, I dealt with the pain, and for the most part was okay…( if you think pooping 14-20 times a day and having constant pain and diarrhea is ok.)

Fast Forward to 2013. I found running. I had lost almost 50lbs, I started running races. I took enough immodium to keep a horse backed up, but I was moving and I was happy. I still mostly hid my UC from everyone. I never had to go to the hospital for it, I guess I was one of the “lucky ones” until August hit. OH MY GOD, I thought I was dying. The pain got so bad I wanted to cry all the time. I was nauseous. If I did eat, sometimes I couldn’t keep it down, sometimes I just cried from the pain of it passing through. Something had to change. I found a new GI (got a reference from GI hottie #1) and she is close to my age which is awesome! (no more old boys club) I got meds, Asacol, tramadol for the pain and omeprazole to calm my tummy AND she got me in for a colonoscopy (only 8 years since I should have been last checked) and BOOM! Hello Inflammation! I had UC, Lymphocytic Colitis and had a precancerous polyp removed. Yikes! So we added budesonide to the mix of med s, scheduled a CT scan and kept on trucking. The CT showed a lot of inflammation as well (I guess I wasn’t as “well off” as I thought I had been) and the pain in my sigmoid area was still killing me. Nothing seemed to be working so I went on Remicade. After 2 infusions, I went in for a flex sig and another CT and the inflammation was gone but the damage I had done with all those years of ignoring my body is going to continue to cause me pain.

What does this all mean? Not a whole hell of a lot. It doesn’t change WHO I am. I am a crazy loud person who will talk to ANYONE about poop. I want everyone I know to talk to me if they think they may have a problem. I want to be that person that has an “incurable” disease that shows people life is still out there. I do not let my pain decide what I can and can’t do. I know where every bathroom is within a 5 miles radius of wherever I am. Not too long ago, a girl asked “who saw their diagnosis as a curse?” on a Facebook support group and I chimed right in. That stranger, from a random FB site is now one of my closest friends and we would have never met had we not shared this disease in common. I am not cursed, I am blessed. I have a life that I CHOOSE to live. I am not letting my body decide how my life will be lived. I can handle it. I chose to share my story because I see so many people see this diagnosis as a sentence to stop living. I want to show people that the mind can to marvelous things and if you allow yourself to believe that you can do something, you can! I hope to see you all out there, taking life by the horns and showing UC it does not define you. Maybe we can go for a run together, and no, I don’t mean to the bathroom.

No questions just a “Hello!” and a “helluva nice site you have here” :)

diagnosed in March of 2000 with UC. I am one of the oddball, overweight UC’ers who doesn’t feel like I am “cursed” because of my diagnosis.