Cramped and Crabby at Christmas 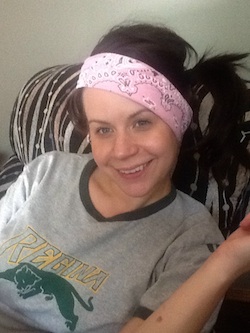 My name is Sarah. I’m a “professional student” and intend to make academia my home forever -cause I love it. I seriously think university is the fountain of youth. Or maybe the “real world” just scares me… I feel the answer lies somewhere in the middle. I was diagnosed with Colitis in 2010, but started showing symptoms in 2008. I cured that 2008 flare-up with patience, probiotics and digestive enzymes. As well as some blinding stubbornness born of youth and denial which involved hiding physicians letters from family as I refused to be diagnosed with colitis at 23. I was no stranger to colitis, my Grandfather lived with it and all the grandkids knew, when Grampa needed the bathroom, you got out! I’ve always been a health-conscious person, and somehow the 2008 symptoms didn’t reappear until late 2009, and by March 2010 I had my diagnosis and was prepared to live with it. All in all, my colitis was never sever e, the family history took a lot a guess-work out of the process.

I enjoy health and fitness. Which I know has helped make a positive impact on the severity of my UC. It also leads to moments of frustration when the flare-ups-for-no-reason surface I also love to cook, I used to bake, but than I decided to try a gluten-free diet and I don’t bake as much. I have no coordination and have given up trying to remedy this, but I’ll try anything once. What I lack in trying to catch a Frisbee or launch a football, I make up for with enthusiasm. No jokes about Canadian Football – This Saskatchewan Girl is a serious Roughriders Fan!! I have a strange obsession with the color pink, this is not from being a girly-girl (even tho I am a little) it started when I first got to college and has just exploded into sequins and glitter.

Currently: cramping, bloating, aches and pains, fatigue and that over-all gross feeling – like you need a detox from your body :P Even tho I’ve been diagnosed since 2010, this feels like the first holiday season with colitis. I hadn’t had a flare up since July and wouldn’t you know, December started with a doozy. To counter act the weight-loss and food-fear, I fell off my usual diet and ate whatever looked good. Enter pizza, rye-bread, and at one point a big mac. lol. It helped at the time, but followed closely by the onset of holidays and extended family who aren’t aware of some of my food limits, and my own lack of will-power, “since I cheated yesterday, what could another cookie today do?” My poor colon is so sad with me, and I with it. No bleeds yet, but its hard to straighten outta the fetal position!

Cramped and Crabby at Christmas:

When first diagnosed I was in that “I’m a diseased person” state. Like I was somehow weakened by this diagnosis, but overall, UC is not that limiting personally. I hate taking meds. and it was the first obstacle to overcome – take the pills regularly. I had to program it into the calendar on my phone, but even then I would hear the evening alert and oftentimes ignore it cause I was busy. When I do feel limited by Colitis it’s usually when I’m in a restaurant pouring over the menu meticulously, meeting new people like peers and professors who will be a part of my life if not for the entire degree, the semester… or on a first date in a restaurant trying to pour over the menu discretely and wondering when to mention “some tummy issues” :S

My family is awesome, but I sometimes still hide symptoms from them. Caught myself doing that yesterday actually, I immediately admitted to my sister I lied and told her the truth of my symptoms, but I still wonder why I feel the need to keep it to myself. I’m sure part of it is not wanted to be the person that everyone is worried about, but I’m sure there is something more… thoughts?

As a mentioned earlier, I went gluten-free and dairy-free as well about 6 months ago. I saw an improvement within a few weeks and until this month hadn’t had a single flare up. It was while doing some research I came across this site, and I honestly have no idea how I’ve never found you all before. The SCD diet totally intrigues me. I was shooting in the dark hoping I’d discover some secret gluten-free, dairy limited means to control my symptoms with less meds and pow! This guy did if for me. That being said I haven’t jumped into yet – My new years resolution it will be! But I have some concerns going in: the biggest one is how any of you SCDers get through an intense work-out without carbs?? And has anyone tried a modified SCD? for example, I know almond milk is my friend. Being gluten-free and dairy-free for half-a-year I don’t think I should have to give up almond milk for 6 months, and other little tweaks like that. Making yogurt intimidates me, a nd not much does in the kitchen. Perhaps buying the organic, locally made, two-ingredient yogurt would be ok??? In my mind it should be fine, but I’d appreciate any advice.

Prednisone is a beast. I was on it for 5 months during diagnosis, and weaning off and made a silent vow that regardless of my diagnosis I would never be on prednisone again in my life. Loved it the first few weeks sure. But yuck. So far, I’ve had to delve into the prednisone stash twice to stifle flare ups, but they were both before I got serious about diet.

First medication I was put on was Pentasa. It gave me hives. I’ve never had an allergic reaction in my life and it kinda made me laugh. Because I was also weaning off months of prednisone the hives didn’t show up until the prednisone was dropping wihin my system, the hives increased. I don’t know why I think this is funny, but after months of diagnosis and fearing the worst, a case of hives! Seriously hilarious!

Second medication: Asacol. This worked fine for me except that my commitment to taking the second dose was lacking. When I missed the second hit, I woke up with a tummy ache that went away as soon as my morning does kicked in. Because of this personal failing on my part, I am now on:

Mezavant, once a day. Very easy for me to remember.

I’m a “professional student” and intend to make academia my home forever -cause I love it. I seriously think university is the fountain of youth. Or maybe the “real world” just scares me… I feel the answer lies somewhere in the middle. I was diagnosed with Colitis in 2010, but started showing symptoms in 2008. I cured that 2008 flare-up with patience, probiotics and digestive enzymes.

3 thoughts on “Cramped and Crabby at Christmas”