Colon Free Is The Way To Be… 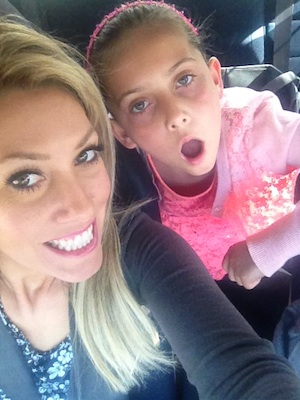 Me with my daughter!

I am 30 year old female I live in Fremont CA….. I worked in a emergency room for 6 years. I am married to a great guy and together we have a 9 year old daughter.

I really hope my story can help…….

It was 4 years ago when I first noticed some blood on my stool. After a colonoscopy the Dr. told me I had UC . I was prescribed Ascol and it did its job for about 6 months. For the next 3 years and many Ascol pills later I was still bleeding everyday. The Dr. said it was normal …..

Ok now let me fast forward to last september 2011 when the bleeding was out of control. I was having up to 18 bloody bowel movements a day (I was keeping a chart). I couldn’t even leave the house. So finally weighing in at only 98 pounds I was hospitalized for a week and given 2 units of blood and was given another colonoscopy. I was put on Predisione and was told that I might have to start Remicade. After a long 5 months on Predisione I was doing very well. Only one bowel movement a day and no Remicade would be needed. Everything was going ok with my colon, But the rest of me was falling apart. my body hurt so bad I could barley walk, I had no energy to do anything, my hair was falling out, I developed moon face and I couldn’t stop eating… but the worst of all was the mood swings… ugh!!!! I’m not trying to scare anyone, I just want to educate people on the drug so they will know what to expect if they ever have to take Predisione. It might be a very harsh dug but I does help.

I still remember the day I finished my Prednisone pills. I was so sad because I knew what was about to happen. I had tried every diet and almost every medicine out there, I just knew I was going to start bleeding again. It took 3 days after I stopped taking Prednisone before the bleeding returned. A month later I was back in the hospital. They had me on a TPN drip for about 3 weeks. And after my 3rd colonoscopy, 1 Remicade dose and 3 more blood transfusions they decided to remove it. Believe it or not I was thrilled! I didn’t care…. I just wanted my life back.

My surgeries were done in 3 parts. I had my ostomy for a total of 6 months (her name was Penny). I’m not going to lie it was a hard road… but well worth it!!!!!. Its been about 6 months since my reversal surgery and I feel amazing! I have about 6 bowel movements a day, none at night. I finally have my life back! The one thing that still amazes me is the fact that I can go to the bathroom and not worry about seeing blood. I really hope this story has helped people. Trust me I know how scary and depressing it is dealing with ulcerative colitis. Thanks for listening.

Sorry if the title is offensive. My sister made it up to make me laugh while I was in the hospital.

No medication ever worked for me except Prednisone…… and even that stopped woking in the end.

I am 30 year old female I live in Fremont CA….. I worked in a emergency room for 6 years. I am married to a great guy and together we have a 9 year old daughter.