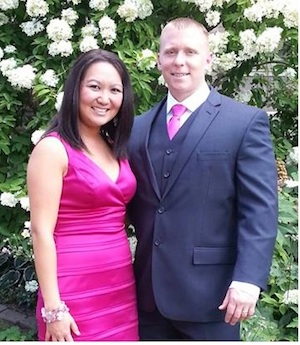 Me and the Mrs looking sharp (I don’t ever get dressed up so I wanted to show the more classy side of myself) haha!

If I was a pro wrestler and had to pick an entrance song I would go with Pantera-Walk cause that song kicks tail!

Hey everybody, it’s been quite some time that I’ve written since getting my J pouch and I just realized that yesterday (8/21/13) was my one year anniversary with a J Pouch so I thought it is my duty as an ex ulcerative colitis sufferer to provide an update so here goes.

So I chose to do a 3 part J pouch surgery. I had my surgeries from December of 2011 through August of 2012. Since my last surgery in August of 2012 I have lived with a J Pouch and I would like to tell you all about it. Not sure where to begin so I’ll try and remember the beginning of my time with the J Pouch. The first two weeks were awful, no sugarcoating that. It was not from the pain of surgery but it was because of the gas pains I had. It was very hard to sleep and very easy to crap my pants those first couple weeks. But I knew things had to get better so I knew I just had to get over it. After the first month or so I noticed a lot of improvement. The gas pains were still there a bit, but the intensity and magnitude of them was much less. I could deal with them. My ass was on fire the first month. If you’ve never heard of butt burn, well it’s basically all in the name. Your butt will BURN after takedown surgery for a while. I bought a lot of Calmoseptine lotion, and that was a lifesaver. I went back to work and quickly realized how much I missed being lazy all day recovering from another surgery. But work was good for me. Keeping busy really makes you forget about what you went through and focus on something different. 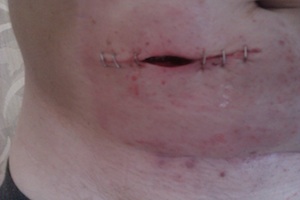 I went back to the gym and was taking it pretty easy. I was afraid of hernia’s after all of the surgeries so I would always wear a super tight abdomen belt under my shirt when I did anything physical. I heard people talking about bidets on another website for J Pouchers a lot so I decided to get me one. I paid $400 for a toilet seat that shoots water up your behind! Sounds ridiculous but it turned out to be a great investment for me as it really helped the butt burn. Not only is it very hygienic but now I’ve got the cleanest butt in town!

There are really only two complaints I have with the J Pouch so far. The first is that my stomach will make some pretty crazy loud noises from time to time. Everyone’s stomach growls here and there, but mine will flipping howl at the moon. I don’t know the scientific reason behind it, but my guess is that it is because I really can’t fart anymore unless I’m laying down (at least fart with any real confidence like I used to). So when I have gas, it travels down my intestines to my lower end and when I do not let it escape, it shoots back up my intestines like air bubbles go up in water and makes a growling noise. The longer I hold it in, the louder it gets. I’m just wondering when I will be in a quiet meeting someday and my stomach will do this, I’m not sure how I will react. Maybe I’ll have a really loud, weird long sneeze to try and cover it. My buddy at work who sits next to me hears it all the time and we laugh about it, but I 9;m not sure how a bunch of people who don’t know my situation would react. They probably will think I just ripped a big one. 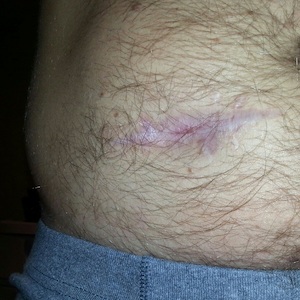 That’s a close up of the scar left behind. I really didn’t want to show my nasty hairy ass stomach, but I wanted to show the progression. Apparently hair WILL grow back.

My second complaint is termed “night time leakage” by the J Pouch community. I call it shitting my pants a little while sleeping. Ha-ha! This happened to me quite a bit the first 6 months. When you don’t have a colon, you can never trust the consistency of your bowels. I will never have rock hard terds like Adam. My best days are something close to yogurt. So a little gas in your tank while you’re in deep sleep and you get a little surprise when you wake up. This rarely happens to me anymore thank God, but it’s really not one of the things anyone will tell you about because they’re either too embarrassed to say it or they’re just one of the lucky ones. 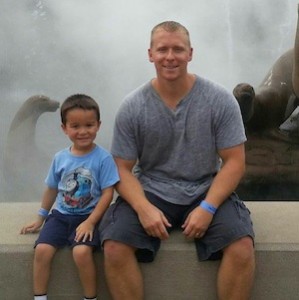 That’s me and my boy at the zoo today

Fast forward to today. I have one year under my belt with the J Pouch. I feel great! I would’ve never imagined myself feeling this way 2 years ago when I was sitting on the pot 15-20 times a day, bleeding, depressed, anxious and scared. I would’ve never guessed I would finally bench press that 315lbs I’ve been trying to get to for years, back to smoking softballs over the fence, wrestling with my boy, eating good food, being happy and living life again! I’ve made some good friends from sharing my story on this website and it’s awesome to hear their success as well with their surgeries. Super big thanks to Adam as always for having this website! I can’t forget my wife either. She was the one that held me together during that difficult time. I would not be where I am now without her. To everyone battling this dreadful disease, stay strong and don’t fear the pouch if your cards run out. I can’t back this up with any evidence except my experience, but I’m confident in saying there are far more success stories than there are horror stories with J pouches, you just don’t get to hear enough of the good ones.