Asperger’s Along with Colitis – Who Else? 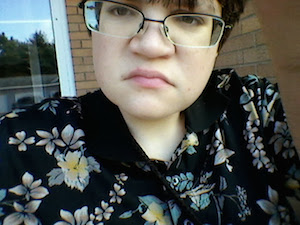 My name is Dani I am 28 and live in Iowa with my cat Shaddow. Along with my UC I also have Asperger’s which is a high functioning form of autism.

Like I said above I am 28 and live in the great state of Iowa. My cat Shaddow definitely lives up to her name as she is always at my side especially when I am hurting or sad.

I have consistently bloody bowl movements, joint pain and cramps.

Asperger’s Along with Colitis – Who Else?

My journey with UC started in January of 2013. One day I went to the bathroom and noticed blood in the toliet. I ignored it at first for like a week hopeing it would go away. When that did not happen I told someone and set up a doctor’s appointment. My first appointment was with my family doctor who said I am pretty sure it is just hemorrhoids but I want u to go to a gastro to be sure. She made an appointment with a doctor I had seen before but did not really like but we don’t have many options in my town. The appointment was not for like a month and I was stressed so I called to try to get in sooner and the nurse was a total witch. She said no I cant get u in sooner it is probably just hemorrhoids and there’s not much we can do for them anyway. Needless to say I called my gp right back and ended up going to The University of Iowa In Iowa city about 30 minutes from home.

The first doctor I saw there was a colorectal surgeon. She was awesome did an exam said I had hemorrhoids but wanted to do a colonoscopy to make sure nothing else was going on. We did that and she did not see much just the hemorrhoids that was in April of 2013. From April to October I probably was back at my gp 4 or 5 times.  Every time they said u need to increase your fiber try this med etc…

Finally out of desperation my gp made an appointment with the doctor who did my colnscopy. That fateful day was October 30 2013. When I got there she said she was going to rubber band my hemorrhoids. She explained all the risk and said one possible thing that could happen is she would have take me to the operating room to remove the band.  She said that is very rare and she had never had that happen. Well we did the procedure in the office and I had a lot of pain and there was more blood then there should be so like 20 minutes later she said how would u like to follow me to the OR today and thinking she was joking I said no thanks. Turns out she was not and I ended up having surgery to remove the band and do biopsies that after noon. She knew right then there was something more going on. I got the news it was UC about a week later and the med trial began.

The couple Questions I have are was any one going through a stressful time when symptoms first started? I ask because I was going through a pretty ruff patch when mine did.

Also any one else also have Asperger’s along with UC?

I am currently on Azathirprine 3 pills a day and just this week added Delsclol 2 pills 4 times a day to that. I also take Probioticks and a multi vitimen every day.

My name is Dani I am 28 and live in Iowa with my cat Shaddow. Along with my UC I also have Auspurgurs which is a high functioning form of autism.

8 thoughts on “Asperger’s Along with Colitis – Who Else?”