A Girl and Her Gut – A Tumultuous Affair 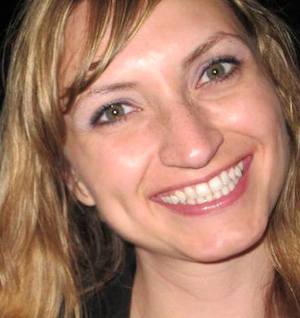 I’m a SF Bay Area native and I was healthy until my my late 20s, I was a healthy. In 2006, I developed symptoms. I come from a line of people who think: “Doctor, I don’t need no stinking doctor.” So, it took me a couple of months to go see a gastroenterologist. I was diagnosed with mild U.C. I beat down the initial flare quickly. For years, I would only take Asacol when I had a flare – which was rare and mild. But then things changed, as I note below.

I like hiking, kayaking, reading and traveling (although I don’t get to travel as much as I’d like). I love my neck of the woods and have never felt like I need to move anywhere, but I do love seeing other places.

As an attorney and that carries a lot of stress which can be hard to manage and I certainly see it affect my symptoms. I’m working on meditating to help with that, but I think I have mindfulness A.D.D. :)

I’m a huge animal fan and I’d save all the rescues if I had the room (and the dough).

Since late 2013, I’ve had severe symptoms ( 10+ bowel movements daily, 60 mg Prednisone daily, Asacol, and Hydrocortisone) off and on. I’ve been put on Prednisone many times in the last year with no result unless it was paired with an antibiotic (even though I tested negative for underlying infections).

By early 2014, I was at 20+ bowel movements daily with severe cramping, bleeding, weight loss, and at 100 mg of Prednisone daily plus other meds. We did another colonoscopy. Aside from “severe inflammation”, there was nothing. Still, my doctor put me on antibiotics, which kicked the symptoms while I was on them, but they came back in June (queue Poltergeist quote). We added Prednisone and antibiotics and the symptoms abated more slowly. But then in Nov. 2014, it came back again and the duo did nothing.

In January 2015, after a Sigmoidoscopy, I tested positive for C.Diff (no clue where I got it from and I’m pretty fastidious about hand washing and the like) and was put on Vancomycin (after Metronidazle did nothing) that the symptoms abated. I have been off the Vancomycin for a couple of weeks and was starting to taper off Prednisone (down to 40mg/day from 60mg/day), but it seems like suddenly symptoms are starting up again. I had to push my doctor to give me a follow up test for C.Diff (happening this week) as she just wanted to put me on immune suppressants and/or admit me to the hospital for intravenous steroids. I have to admit, I’m getting a bit frustrated with the lack of a wider vision by my doctor on control of and options for my UC and treating the C.Diff. I’ve started to look for a second doctor, but it’s intimidating trying to wade through information on good options.

I’ve been lucky. UC didn’t impact my life much until the last 1.5 years, which have been difficult. I always try to keep positive and not let it stop me from living. But, there were times I was tied to the bathroom and sometimes depressed and feeling hopeless. The fatigue was also rough because it made even small tasks or events seem much harder. My friends and family, and even co-workers, were wonderfully supportive. They made, and continue to make, a huge difference.

That the symptoms are returning after Vancomycin scares me, I’m not gonna lie. I’m also having a hard time getting my doctor to discuss alternative approaches (e.g., FMT) and think I may need to change doctors to one that looks at the treating the cause as much as the symptoms, particularly as mine has been out of town more often (which would be fine if there was a back up) and often takes a while to respond (but in all fairness, she will call back at some point even if it’s 7 in evening).

That said, this illness has pushed me and taught me a couple of things:

1) Be your own advocate. I may still choose an immune suppressant, but being pushy forced my doctor to keep testing. If I’d just taken Remicade, the C.Diff would not have been treated and would have caused my body more trauma.

2) Be open about U.C. Doing this provides me a stronger support group (family and friends are vital, particularly when during a flare). I’ve always covered up the impact of my flares from my Dad. But, last time, I didn’t have the energy. It was a good thing. It was the first time he saw what U.C. (and C.Diff) does to me. Now, he gets what “I don’t feel well” means and helps me when I’m having issues. It’s much easier to participate and not feel as weighted down when you have people around you who “get it.”

3) It’s a journey to find what works and discovering our strengths in managing U.C. And it does take strength. If you only get one thing done a day during an active flare; that takes strength. Be proud of yourselves for doing what you do every day.

Medications and Supplements She’s Involved with:

Vitamin D – 1 dose daily
Calcium – 1 dose daily (since Prednisone can impact bone density)
Cabbage Juice (although, I admit keeping up on making this and having it on hand isn’t my strong suit. If it were, I’d be drinking 2 cups daily)  (Cabbage Juices on Amazon-click here)


Not using Canasa or hydrocortisone suppository although I have them since they didn’t seem to do anything during my flare.

Good health to you all,

I’m a SF Bay Area native and I was healthy until my my late 20s, I was a healthy. In 2006, I developed symptoms. I come from a line of people who think: “Doctor, I don’t need no stinking doctor.”

10 thoughts on “A Girl and Her Gut – A Tumultuous Affair”