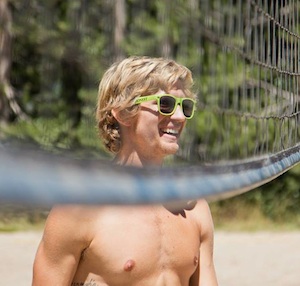 Student-Athlete at UC Berkeley
I was diagnosed with UC in July of 2013
Having a Colectomy done next month, wish me luck!

I grew up in San Diego, where I cultivated a strong love for Running and Surfing. Running (and academics of course) have taken me to UC Berkeley, where I am a senior studying Media Studies, and captain of the Track and Field and Cross Country team. Also, I Love my dog, Butters!

Right now, I have excruciating pain in my lower abdomen that is controlled only by pain killers. I have watery, bloody bowel movements between 5-10 times a day, am severely anemic, and also recently came down with a C. Diff. infection.

In 2012, I was 20 years old. I was in my junior year of College at UC Berkeley, running on a full ride scholarship for the cross-country and track and field teams. I ran personal bests in every event that I ran, and was as healthy as could be. In fact, things were going so well that I travelled to Europe to run in competitive races throughout the summer. It’s 2014 now though, and I just turned in paperwork for a medical leave of absence from my final semester at school due to severe Ulcerative Colitis.

Around February of 2013, I started noticing things in my body were not right. They were minor, but I’ve spent a majority of my life being well in-tune with the way I am feeling, and I could tell something was off. I was still running at this time, and actually quite well, but I couldn’t help but feel there was something holding me back, like a tire on a bike that wouldn’t stay fully pumped. It was around that time that I started seeing blood in my stool (gross, I know).

There were no other symptoms, and the doctors told me that I had hemorrhoids; no big deal. I kept running. But after a couple months without change, I started to have more issues. The frequency in which I had to use the restroom increased, and my body continuously felt more and more out of whack; that tire had to be refilled more and more often. As a response, I trained harder and ran further. It was the only way to maintain the improvement that I’d seen the year before, or so I thought.

My season ended in a pretty lack luster fashion. I failed to make the NCAA national meet, and I went home disappointed asking myself ‘what had happened to the Collin from 2012’? After some time, I started the long process of summer training, a ritual any distance runner knows well. I slowly regained confidence and fitness as the summer progressed, but my symptoms remained and I needed to find out why.

“According to web MD, hemorrhoids don’t last this long”, whispered my inner hypochondriac, “But Cancer does”. This stint of online research, along with some very strong urges from my parents, led me to go to the doctors to get checked out. Thankfully, after a sigmoidoscopy (the colonoscopy’s tame little brother), I found that I did not have cancer. Instead however, I was diagnosed with Ulcerative Colitis. After a second bout of online research to figure out what Colitis was, I was pleasantly surprised with what I found, given the circumstances. I was nowhere near as bad as the testimonials I read online. Pain? That wasn’t happening. I was still running – and running a lot! I thought I’d be able to knock this thing out no problem, and even better, I’d finally found an answer to why I’d been feeling off; that deflated tire would finally get patched!

This however, is not the way my Colitis story goes. Within a few weeks of my diagnosis, the pain started. I was put on some anti-inflammatory drugs, and given a ‘low residue’ diet plan to follow, but the pain persisted. Over the course of the next few months (September through November), all of the UC symptoms started to appear, and my pain became more and more of an issue. This of course, meant that my running was taking a serious downturn, eventually to the point where I was unable to run at all.

The relationship a competitive runner has with running is extremely unique. On one hand, it is a huge source of stress. Competing and training at high levels, with exceedingly high expectations make it difficult to handle at times. But at the same time, running is the ultimate stress relief. It is an outlet we use to unwind, relax, or let go. Its funny how one day a bad workout can put you in a terrible mood, but an easy run the next can put you totally at ease. Personally, I’ve found that running has always been more of a release for my worries. It’s not to say that it doesn’t stress me out at times, but for the most part running has always been my therapist, my answer to difficult questions, my go-to in times of trouble. The reason I’m saying this is because since Thanksgiving, I haven’t been able to run at all. Suddenly this balancing force in my life has been taken away from me.

I can say with certainty that the last 3 months have been the worst days in my life. Each day I am in seemingly more and more pain, and my body is slowly withering away. I have gone from 160 pounds to 140, and can barely walk to my classes. I sleep less than 5 hours a night due to pain, and worst of all, I can’t talk to my therapist, running. It has all been quite depressing to say the least. For weeks I wouldn’t leave my bed, partly because I couldn’t, and partly because I wouldn’t. Up until a couple days ago, I wasn’t sure I’d make it. But I’m not here to write a sob story, and I’m certainly not fishing for any sympathy (although hey, I’m not going to turn it down either). What I am here to say is that in the last couple days, I realized what this experience means to me.

My favorite professor here at Cal told our class that, “Only challenge produces opportunity for greatness”. I believe that until this diagnosis, that I have never truly been challenged. Much of what I consider to have been challenges in my life were somewhat artificial, in that I made them out to seem much bigger than they actually were so that I had obstacles to climb. I needed to fabricate challenge in my life to push myself, but that didn’t prepare me for when a real one came along. Now, I am presented with a real challenge, one that so far has beaten me into submission. But I realize that I need to seize this opportunity and recognize its potential greatness.

In less than a month, I will undergo a series of surgeries to have my large intestine removed. For a time, I will have an ileostomy bag hanging from my side for my poo. I will not be a happy camper. But thankfully, I am going into it all with a new perspective: when I am healthy again, I will have grown to be a much stronger person, and in particular, one who can really appreciate what he has. My entire life has been an absolute dream; it just took a little reality check to make me see that. From this cave that I’m in, I look back on my past, and it brings me to tears thinking about how wonderfully fantastic everything has been. My friends, my family, my home, running… you name it. And it brings me an indescribable amount of joy to know that I still have those things, even if I can’t do them all right now.

So I guess what I’m getting at is that this terrible disease has given me the ability to truly see what I have. Colitis may have taken away some things, but it isn’t permanent, and this knowledge combined with my new ability to appreciate all of the other amazing things that I have going for me is my greatness. It is a veil being lifted, and as I move on with my life I will be able to see all that I have with so much more clarity; And even though I’m in a pretty spectacular amount of pain right now, I’ve never been happier. (Norco might be helping with that too ;) )

To all the other UCer’s out there: don’t lose sight of what you have, and in the legendary words of Joe Dirt, “Keep on, Keepin’ on”.

8 thoughts on “A Battle Within”