How is Your Poop Count – Once or Twice a Day?

I hope you are all excited that we’ve got a weekend coming real soon, should be some relaxing for some of us right?:) 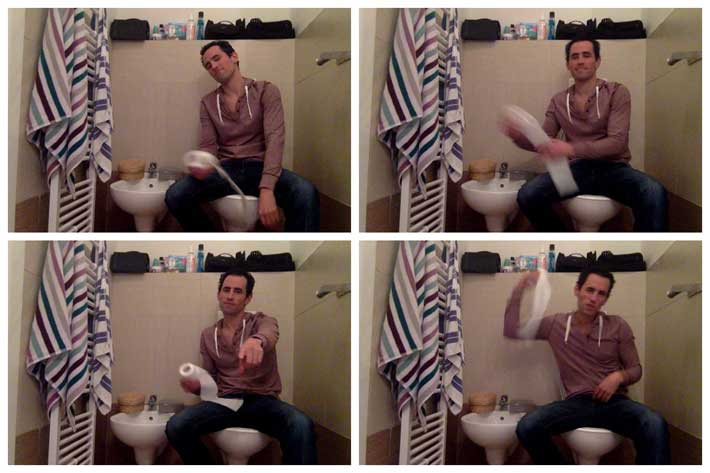 the place we’re staying has a but cleaner(or most call them “bidets”), sweet right!

Things are going pretty good right now UC wise and I wanted to explain.  I’m pretty sure some of my thinking can help some others with UC who are struggling at the moment and not sure which way to turn.  It was only five years ago that I was in that situation.

Settling into a New Routine

You see, a few weeks ago (I think it was September 8th), I found myself in a completely new routine.  I started going back to school again for the first time in nearly 15 years, and I was a bit nervous that this sudden lifestyle change may affect my UC.  I didn’t know if my body could handle sitting at a desk for the first 5 hours of the day, without being able to walk around.  Might sound crazy, but hey…all the UC’ers have lost a few screws along the way right?

So, it’s been 3 weeks of school.  Here’s the daily schedule:

It’s probably not as hardcore as some of you who are in school, but it’s a new schedule none the less.  I’m waking up at 6:00 in the morning.  Making my breakfast smoothie, having a cup of ginger tea(with honey and lemon).  And then heading out the door.  Of course, several days a week I’m finalizing my homework that sometimes I don’t get to the night before…But that’s how my day starts. You can watch my video about that here if you want to see exactly how I’m doing them now- smoothie video.

Half the days I drop a poop before going out the door, the other half I poop when I get home or later at night. 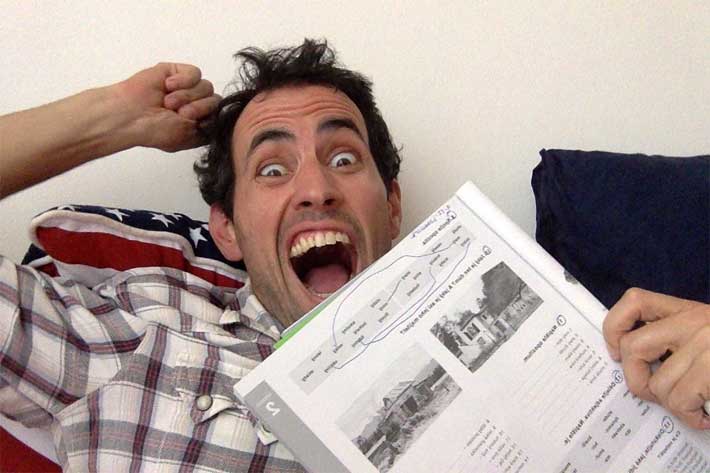 Getting my czech homework done on the couch.

Eating during the day is something we all deal with somehow.  Hopefully not too many avoid it completely.  I know what its like to be next to others and to hear your stomach growling because its hungry.  I think I might have scared a classmate with those sounds the first week.

So my fix for making sure I get a snack or a meal while at school, is to pack a meal.  Sure, there’s a vending machine that sells all sorts of crap food I could hit up.  But every single thing in there is not part of my diet.  Snickers candy bars, chips that have who knows what in them, Chocolate Chip cookies, you know the stuff I’m talking about.  Let’s not leave out the M&M Peanuts…(Been 5 plus years since I chowed those guys…used to demolish a bag in about twenty-five seconds:)

Nope, not playing with any of that crap, and I’d suggest you don’t either.  You can do better than that, and your crapper is going to be much happier too.

It’s nothing really too new for me.  I just forgot how easy it was to make.  And I’m talking about a meal that’s healthy, filled with some high quality protein, and will fill you up.  Oh, lets get real, it only takes about 5 minutes to make in the morning.(not including cooking time of the meat which you can do one day and last thru the next few days:).

Yeah, I’m busting some super bomber chicken salads once again for lunch.  Had them all week, and real happy about that too.

So do the math.  I think I’m doing pretty good with keeping the toilet paper use down.  Heck, I think my wife might even be using more than me at this point..:))HAHA right!  Come on though, that’s something we can all shoot for right?

If your poop count is way different, OK, that can change, don’t get discouraged.  Are you eating similar to me?  I should throw in, I haven’t had a coffee in three weeks either, straight ginger teas, or apple cider teas, or water, or vodka on the rocks(only a few per week of those).

Does Eating the Same Stuff Get Boring?

To an outsider, or someone who has never been on a diet before, you might think my meals seem boring.  I think those folks are missing something.  And Louisa, the super super super nice Swedish girl who sits next to me in class would disagree with you too.  She also makes her own lunch each day, and we often eat together between classes.  I’m no executive chef or anything, but she’s been getting pretty excited when I answer her question of, “What’s in your salad today Adam?”…

Like today for example, I told her I had: 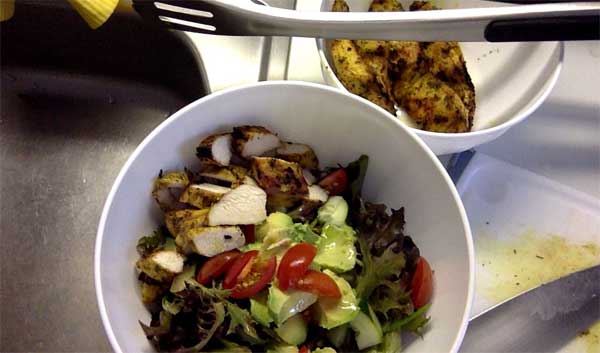 I’ve been anti-apple for so long, but that’s changing again.  A good change of heart too.  It’s tasty stuff.  And if you put in a decent amount of chicken, say a half pound or more, along with the avocado, and extra virgin olive oil, you can get a decent amount of calories to get you through the day.

Give it a try.  And believe me.  There’s so many different combinations of ways to get creative with salads the list could go on forever.  You like steak…no prob.  You like fish…perfect.  The list goes on and on.  As you can see, I’m not a vegetarian in the least, so I don’t have many ideas for those of you there since I don’t eat soy, and some other stuff that vegetarians often eat.  Some of things are no good for UC in my opinion, so I stay far away.

I don’t eat grains.  Gluten or no gluten, it doesn’t matter.  The reason why is because many UC’ers simply can’t process grains along with many other carbohydrates properly.  And this leads to the immune system kicking in and things potentially getting ugly.  It’s all about gut bacteria.

If I was able to eat bread, or bagels, or toast, HECK YEAH I’d be chowing that stuff in the morning, and probably making a super bomb sandwich for lunch everyday.  Or running across the street and picking up a piece of pizza to go.  I CAN’T LIE.  That’s what I’d be doing.

That food has proven one too many times to send me into a UC flare, and I’m not willing to deal with a UC flare again.  It would be nice to have, for sure.  But what I’m making for lunch these days, along with breakfast and dinners is working just fine.  And since next week will be my 6 year anniversary of being diagnosed with UC, I surely don’t want to be feeling like I was six years ago.  I was on the bed, sometimes the couch, and mostly the toilet dropping bloody bombers down the drain all day and night.  Killing whales was a daily event in the toilet bowl, and that is absolutely not worth a few grains and refined sugars getting into my mouth.

Let’s Wrap this Up with a Timeline

Have a great weekend UC’ers, and if you have a special salad idea, let’s hear about it!

** also, just because I don’t take medication surely doesn’t mean that medications don’t help others.  I’ve met hundreds of UC’ers who are most certainly getting benefits from meds.  But, at the same time, I know there are tons of UC’ers who aren’t really getting much benefit from their meds, and for those folks, that’s unfortunate.  Maybe go and read through this post again if you’re still scratching your head.  Or go to the site map and check out the 2500 plus stories from others who are dealing with UC in different ways.

***And if you are a UC’er, definitely go and do one thing early and often.  Make sure the family and friends who support you and help you out with your UC know how much you appreciate their support.  Some of the very best things that can come along with UC is finding out who you can count on when medical craziness strikes.  And hopefully you’ll be there for them as well when they need you.