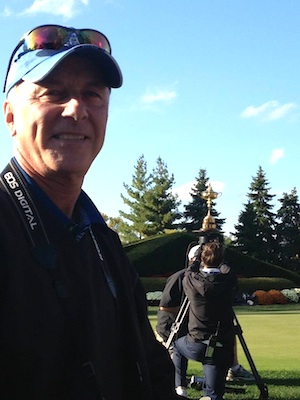 Age 65; male and married with one daughter. Retired Engineering librarian after 34 years. Diagnosed around 1967 or so. 3 day hospital stay was worst experience in my life and then the doctor didn’t ‘find’ anything until he sent me to a specialist.

Some More about Me:

I golf, garden and paint (oil and acrylic) among other things. Milwaukee is my home town.

I have had ulcerative colitis for over 40 years now. I would classify it as mild to moderate. And for most of these years I had been taking the golden standard sulfasalazine along with mesalamine enemas. Typically I get the flareups in spring and fall and they can last many months. It would consist of aches and joint pain, flu like feeling, eye problems (hard to focus, light sensitive), many bowel movements and a lot of diarrhea. No blood though. And of course the bloating, cramping, gas etc. we have all come to know and love.The last major flare was May 2010 and the symptoms were bad enough i thought I was having heart issues and was rushed to the hospital for a catherization.

Those symptoms lasted throughout most of that year. I had another one last January and after a colonoscopy in early May the symptoms went away until mid July. I had switched doctors and he took me off asa even though I maxed out the drug to quell the flareup. He put me on 3 different mesalamine drugs starting with Apriso. Within a few days I got sick – actually made my symptoms worse (worst was back pain – enough to stoop me over until I could work out on a treadmill and have the obligatory BM’s). I stopped taking each one and the symptoms went away. So I boldly took one pill a few days later and, sure enough, the same symptoms came back.

While there is no definitive allergy test for this the doctor believes I had been allergic to ASA, along with mesalamine all these years! Thank you so very much, indeed.

Now a new event is occuring. He placed me on prednisone for 8 weeks along with Imuran. Starting the 3rd week I got severe chills then a high fever and this went on for several days. Fortunately, I paid attention and noticed the ‘event’ occur about 6 hours after taking the Imuran. Nurse said its the flu; I said it doesn’t come back each day at cocktail hour. I decided to stop and the symptoms went away. So we are now trying mercaptopurine. But after 2 days the same fever came back. I decided that I would try taking it in smaller does. I had read about weening one on these type of drugs to get the body acclimated to it. So far I am taking a quarter pill twice a day with no side effects. Eventually I need to get to the pill dosage of 50mg (which is rather small dose). The big problem is I am running out of drugs to try.
The colonoscopy showed that the colitis is perhaps pan colitis now. And for whatever reason I seem to be gaining allergies rather than having them diminished at my age.

Through it all I have soldiered on. My wife knows when to not bother me or ask what ‘would you like for supper’ when I have flares. My heart issues have made my diet much more rounded and easier I suppose as it relates to the UC. After Prostate cancer and two stents I lost weight and work out every day now. I do treadmill and run outside if the weather permits and I do some sort of P-90X or the like on a daily basis(total of 1-2 hours each day). I have found this helps with my overall health and well-being, and if I miss a day I just do not feel as well the next. Even when I feel my worst with bloating and gut pain I work out even harder – just trying to beat down on the UC. I know I am very fortunate that I haven’t had it as bad as others up to now. I also know it could all change. But I am grateful I have been able to live with it to this point. And with dignity too.

But wouldn’t it be nice to have a cure…

Age 65; male and married with one daughter. Retired Engineering librarian after 34 years. Diagnosed around 1967 or so. 3 day hospital stay was worst experience in my life and then the doctor didn’t ‘find’ anything until he sent me to a specialist.