3rd Colonoscopy Said and Done – Not 100%, But Big Improvement 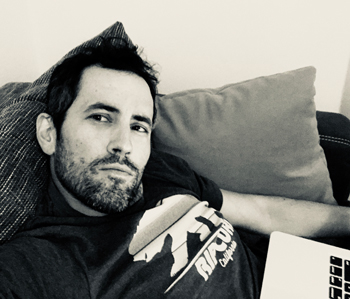 me on the couch a few days after the colonoscopy

Well let’s see, the last time I was writing about my colonoscopy results was back in September/October of 2012. (The link and video to those details is here, and shows my super cool GI doctor “Dr. Neil Stollman” who would be high on my recommendation list, BTW…he has UC too)…if you live near Oakland, California…or can travel easily thereabouts.)

And if I do the math correctly, that means that I was nearly taking a 5 and 1/2 year break before getting my butt probed again by the gentlest of GI doctors.  Um…I think that is too long for us UC’ers to go, and definitely not something I’m proud to admit to.  But, my guess is that there are a few of us UC’ers out here, who like me, don’t really enjoy the preparation for this medical magic known as the COLONOSCOPY Procedure. 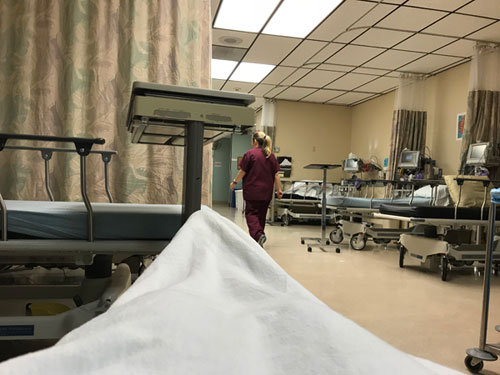 me looking at my toes under the blanket…there’s a nurse there…and a door beyond her opened up and was where I was wheeled into for the actual scoping..

I will save some of the details that are probably not needed for this UC crew who wanders the ihaveuc pages, but December 28, 2017 was my 3rd day in the Court of Colon.  And this particular colonscopy had some special re-connections for me.  Reason being, the doctor, let’s call him out by name (Dr. Harvey Young, Gastroenterologist), who is the first person on this planet to actually enter my butt hole back on the day that I was diagnosed with ulcerative colitis, was the doctor on duty, and he now is the only person to enter me from behind 2 times.  I hope he is not proud of that.

So what did he find?

What did he see?

I will get into all those details, maybe even some pictures if you are patient, but there are some thoughts I must add before we go down the deep dark doo doo hole. 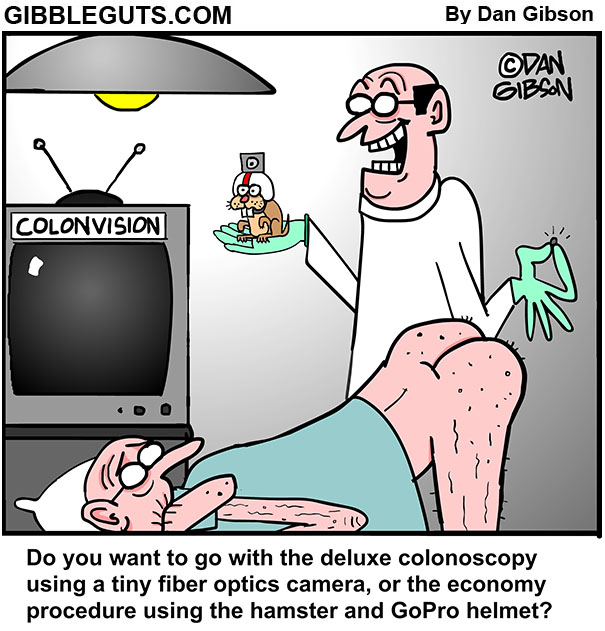 I was a bit scared of this colonoscopy.  Mainly, I have had a bit of a hard time recovering from previous colonoscopies.  At the time of my first colonoscopy/diagnosis in 2008, I was severely inflammed.  The procedure definitely did not help that.  I’m sure many have felt the same.  And…as you may already guess, I was worried the recovery from this scoping job would take lots of time.

I was scared that maybe there would be some findings that I had not expected.  I have not been doing any medications now for years.  Things have been going pretty good.  I have followed the diet I have talked about for several years, heck maybe 6-7 years…but as of the last year, I have started eating much more freely…heck…even put on a few kilograms/pounds…And again…I was worried that the real check…the colonoscopy might ruin my marathon run at some pretty darn good health.

I live in the Czech Republic right now. I have for nearly 4 years now.  I have free health insurance out here.  But…for some reason, I just don’t want a Czech doctor doing the dirty deed on me…I’ve been to the hospital here for a busted ankle…and a busted knee…and heck..what can I say…they are not the most gentle of doctors in my opinion.  And I’m hoping the next GI who goes in my Doo doo hole is as gentle as can be.(This all means I am scared of the procedure…in case you haven’t figured that out already)

So I did it.  On the advice of my father, I made a last minute appointment in Palo Alto, California, down the corner from Stanford at Dr. Harvey Young’s colonoscopy center when I was back home over the holidays.

And I was shocked at how it all went down.

First, the prep for each of my three colonoscopies has been a tiny bit different.  This time, I was to drink these two 8 ounce bottles of some solution mixed with another 8 ounces of water.  (So 16 ounces total in the first glass).  And then two cups of 16 ounces of water again in the next hour.  Wait 3 hours and repeat.  It was pretty nasty tasting, as is usually the case…but I did the first three glasses.  And after a short amount of time, lets say before an hour passed, I was off to the races.  To the nearest toilet in the house, which was strategically just about 4 seconds away that whole night.  I started the prep at 3pm, took the second round of cocktails at 6pm, and was all done with my business at 8pm.  —I must admit, I didn’t drink the 6th final glass of water…would have been best if I had…but I thought my bowels were clear…(was not the case Dr. Young realized..)

I was in bed, no food of course that day, and needing to wake up at 6:30am for my “first of the day” 8:00am butt probing/colonoscopy by Dr. Young.

Got a ride down to the center..I was in the colonoscopy center at 7:15…just a few minutes late..and filling out paperwork with some mighty nice nurses and physician’s assistants.  And then off to my bed/roller to undress, put the gown on..and get under the covers.  The wait began. 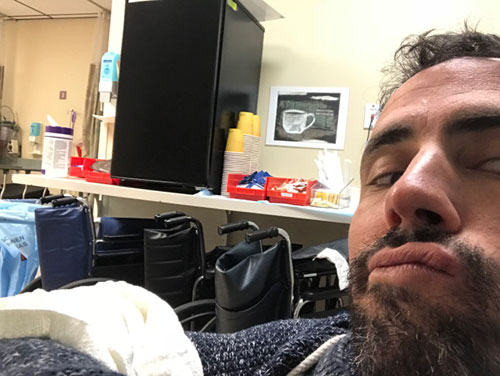 Picture of me after getting the gown on, still had on my sweatshirt, and some nice wheelchairs in back..

I heard on the loudspeaker something about Dr. Young…and it was my turn.  The nurses came over, wheeled me into a “secure room” and there he was.  Dr. Young, the man who diagnosed me back on October 2nd 2008.  I hadn’t seen him since that day, but wow, he looked the same.

“So Adam, how is Prague?”, was the first thing he asked me.

I’m pretty sure I said something like, “Yes, its a nice Cold place, come over and visit, I’ll show you around my favorite toilets”.  Maybe not that exactly.

But he did ask how my UC was going, and right away he asked what medications I was taking.

He was a bit surprised when I told him I was not on any medications for years, but he took note.

Just a few moments later, I was waking up, and the snake was sliding out of me.  I could literally feel the scope slithering out of my bottom deal, and just like that, the colonoscopy was over.

I was quite weary, as they put me under(semi under I guess they say) with Demerol 75 mg IV and Versed 3 mg IV over the course of about 36 minutes of “moderate sedation time”.

I can remember him coming over and letting me know that things looked MUCH better than they were 9 years earlier.  Again, when he scoped me originally, my entire colon was severely inflamed, cut open everywhere, and not in good shape.  So I was sure this was going to come out much better, but it was great to hear.

Soon after, he handed me the full report, with pictures and all. And it was amazing to read some of the comments.  Comments such as:

Now, let’s not crack all the champagne bottles, there was some things to take into account, and not all was perfect, some items such as:

Overall, the IMPRESSION WAS:

As for the biopsy results, they were equally impressive to me.  No per-cancerous cells found, and for the most part, normal tissue with some signs of inflammatory bowel disease(which was expected).

So this concludes my recapping of the colonoscopy, it wasn’t an absolute 100% A+, BUT, I was very pleased to have gotten this taken care of and had another day in the Court of Colon to see what it looks like.

Maybe most importantly, I was absolutely shocked that within just 3 hours, literally by the early afternoon that very same day, I felt fine, and was really wondering if I had actually had a colonoscopy earlier that morning.  No side effects, no bleeding, and that evening I started producing harder stools once again.

I wish all of you a great day, and for those scared to get their colonoscpy done, I understand(I was too).  But definitely realize, there is a definite chance that it will go MUCH better with a speedy recovery faster than you imagined.  It is possible, and we’ll see how the next goes,

previousRecently Diagnosed with Ulcerative Colitis, Not Sure What to Think
nextI’m Healed, Praise God