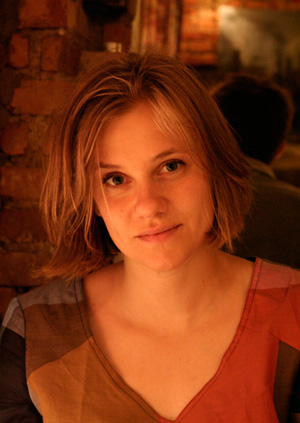 I am a 34-year old woman from Sweden. I work as an architect, and I have a 1,5 year old daughter. I have UC probably since I was a teenager, but I wasn’t diagnosed until it got really bad back in 2008. I still have my colon, but perhaps not for much longer. I’ve just started the SCD diet, hoping it will help me. My primary goal is not to keep my colon, but to be able to have another child or two before I’m too old.

I enjoy cooking and growing vegetables. I’m a nerd when it comes to different materials, like wool for example. My dream is to buy a farm in the country side and be semi self-sufficient.

Diarrhea, water thin about 2-4 times a day, a little blood. No fever yet. No apetite. I am on day 2 of the intro diet of SCD.  [ilink url=”https://www.ihaveuc.com/the-diet”]SCD details[/ilink]

When I flare, I get thin diarrhea with blood in it, and after a while also fever. I always loose weight and feel fatigue, but I have very little pain and no cramps like other with UC experience. When I flare, my lab results are always very high on everything they measure, so I usually end up being admitted to hospital for at least a few days.

I have tried almost all of the medications there are:

Lots of Prednisolon back in 2008-2009, which used to work really well when I was on a high dose but the flare would come back straight away when tapering down. Prednisolon makes me a horrible and miserable person.

I tried Imurel (Azatioprin) in 2009 which quickly gave me some very serious side effects and I ended up in hospital twice with a very high fever and difficulties breathing.

I took Asacol (Mesalazin) from 2008-2009 but I eventually got renal failure from it, and I don’t think it ever had any effect on the flare.

In June 2009 I tried Remicade and that made the Ulcerative Colitis go into remission and I felt great. But two months later I suddenly got a really high fever again and was rushed to hospital where I spend the whole of two months being really ill and the doctors could not figure out what it was. My blood tests showed some sort of serious infection/inflammation, as bad as someone with a double sided pneumonia, but I had no other symptoms apart from the high fever, even my tummy was doing really well. The doctors looked for everything on heaven and earth, like HIV, rheumatic disorders, tuberculosis, tropical illnesses, you name it, they tested everything, but found nothing. The only medication I was still on was Asacol, and when the renal failure was discovered they took away the Asacol, and within a few days I was all fine again. To me, it was obvious that it was all because of the Asacol, but my doctors say they have never seen anything like it and won’t blame Asacol for anything else b ut the renal failure. It was one of the strangest experiences ever and to this day I have no idea what was going on during those two months.

After this horrible episode, I was completely medication free and symptom free for almost two years, and my UC was mysteriously completely in remission. I was not on any diet or anything. During this time, 2010-2011, my stomach had never felt so good in my entire adult life. The doctors did not seem to think that this was strange, as UC can be like that, just suddenly go away and stay away for a long time for no obvious reason.

Unfortunaly this did not last, and I started flaring again in the end of 2011. I was put on Humira, which worked really well and has done for many years. In 2013 I was pregnant and gave birth to a healthy baby girl. Only in the third trimester did I have to stop with Humira. When my baby was three months old I had another flare and was put back on Humira. Humira is the only medication I have tolerated ok, but it gives me a high blood pressure, and this last winter it got a lot worse and my blood pressure got dangerously high. The doctors don’t know if it’s because of Humira or because of something else (I am certain it’s because of Humira).

I have been standing in the queue for surgery to remove my colon for a years time, and I was scheduled for surgery on May 27th, but the surgeon cancelled it because of the high blood pressure, he wants the reason for it to be straightened out first. And that is also something I have to queue for for several months.

In Sweden, health care is free, but it’s difficult to access because all the hospitals are overloaded.

In the summer time, there are not enough nurses or doctors, so they shut many parts down. Since I was so convinced myself that it is Humira that is causing the high blood pressure, I decided to stop taking it three months back. And here I am with a flare again since one month. And nobody is going to do anything about it until after the summer (unless it gets life threatening of course). I was prescribed Prednisolon, which I am taking, but it doesn’t work as good as it used to, I still have diarrhea.

The only thing I haven’t tried before is diet. I have no idea why. But now I’ve bought and read Breaking the Vicious Cycle: Intestinal Health Through Diet

I am curious to hear if anyone else has had similar reactions to the medications like I have. The doctors here say that my body’s powerful way of reacting to medications is very unusual. My immune system seems to strike back when something is suppressing it.

Thank you for reading :-)

Hey I’m the 1,192nd writer on the site. Yay!.
I am a 34-year old woman from Sweden. I work as an architect, and I have a 1,5 year old daughter. I have UC probably since I was a teenager, but I wasn’t diagnosed until it got really bad back in 2008. I still have my colon, but perhaps not for much longer. I’ve just started the SCD diet, hoping it will help me. My primary goal is not to keep my colon, but to be able to have another child or two before I’m too old.