31 Years with UC and Finally My Head Is Out of the Sand! 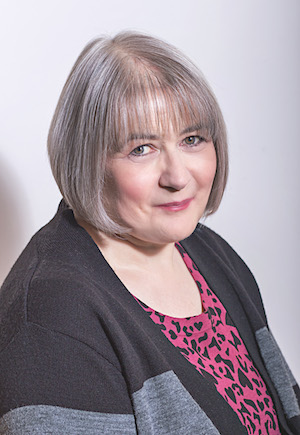 Hi – I was diagnosed with UC in 1984 (I was 26). I’ve been on sulphasalazine since then, started taking Pentasa suppositories after a small flare up last year. I have a colonoscopy roughly once a year. Talked about diet with the NHS consultants but haven’t actually done anything about that (yet).

Some more about Elaine:

I live in the UK, in Surrey near the Hampshire border (was born in Hampshire – I haven’t traveled far!). I’m an accounts clerk by day (35 hours a week) and write books and run various websites in my spare time.

I’ve just had a medium flare up (the usual – diarrhea, blood, etc) and was off work 3 days. I water-fasted for about a day which seems to have helped.

My story is that I was diagnosed with Ulcerative Colitis in 1984. I was prescribed sulphasalazine which seemed to pretty much control the flare ups, although I accepted more bathroom trips than anyone else and the occasional ‘mad dash’ to be part of the condition… I’m now married with a son, but in 1991 we lost our first baby due to spina bifida. I later learned (through my own research, not from the Doctors!) that it was probably as a result of not knowing that sulphasalazine can inhibit absorption of certain essential minerals. After we lost our daughter, we saw a private consultant who recommended a course of vitamins and minerals, and I’m happy to report that our son was born healthy three years later! I was prescribed Folic Acid by my previous GP some years later, which I take every day.

I haven’t really ever tried to follow a UC-healthy diet, mainly because I could cope with the symptoms I did have and have been mostly fortunate not to have too many flare ups.

My family are used to my ‘bathroom woes’ (like we can never leave early on a journey because mornings are the worse, even if I’m not in a full, bloody flare-up). This year when we decided (for financial reasons) not to go away I was so-ooo relieved! (Although my hubby wasn’t!) Mainly, I tend not to talk about my UC much to anyone as a rule, so my family probably don’t know the half of it!

The progress of my disease is somewhat similar to Adam’s except that I was (thankfully!) never quite as sick as he got. Sulphasalazine has seemed to control the symptoms pretty much, in that mostly I have not had too many flare-ups with blood and bad diarrhoea. Over the years, I have accustomed myself to having to go more often than anyone else does, not to mention the occasional ‘can’t wait’ episode (and the odd humiliating stop at the roadside – every lay-by should have a Porta-Loo in my opinion!) – isn’t it amazing how much we come to think of as ‘normal’ when we have UC??

But lately this has started to change, and I do wonder if 31 years down the line, maybe the medication isn’t working so well, or perhaps other changes in my body (the menopause, for instance!) have caused more flare-ups…. Almost certainly, I need to start taking more care with what I eat than I ever have before. I do find my job quite stressful at times and I know this hasn’t helped. As I said, I’ve very much favoured the head-in-the-sand approach, but what’s the expression – ‘wake up and smell the coffee!’??

Well I think I’m waking up…

I don’t tend to trust the health professionals here in the UK too much because it seems to me that all they want to do is give you different medications. The hospital did ask me last year if I wanted to see someone about diet, and I agreed. But when the food diary form came I chickened out –they wanted seven days of what I ate and what symptoms I had – would that be enough? I wasn’t sure. They talked about a ‘food exclusion’ diet – cutting out all dairy (I’m not lactose intolerant), then all wheat/gluten (apparently I’m not coeliac either). I didn’t feel confident that they knew what they were talking about (not that I do either, so…) Also, I had visions of spending ages looking at labels in the supermarket (and a food shopping trip almost always involves at least one trip to the loo – if it doesn’t I feel like I’ve won a gold medal!) Finally, I think now I am at the point where I do want to make a diet change, not only for my UC but because I am overweight and I don’t have the energy I know I should have. It is very frustrating because I have so many things I want to do… but how can I contemplate giving a talk about my book when its published, if I’m worried I might have to dash off in the middle of it?!
Sorry if I have rambled on for too long…

Medications / Supplements / And Other Treatments Elaine is Using/Used:

At the moment I’m on:

Clipper steroid – think it might have been 5mg, for a month – my GP gave me this the summer before last when i had a flare up. I often seem to get one in the summer, and again at Xmas – but no surprise with the latter, all that rich food…nuts…) but it didn’t work at all – it was after that I started on the Pentasa… which was given in addition the sulphasalazine and the folic acid.


Pentasa 1g suppositories x 1 at night – has seemed to help somewhat…. but if i take them without a break, i get terrible itching and a rash, mostly over my lower trunk but also on my legs and scalp and behind my ears. It took me longer than it should have to realise this could be related to the drugs! So I tend to take them on alternate days, or maybe two/three in a row then miss one, and mostly that works, but I still get the rash and sometimes awful itching. I think my most recent flare up happened because I had a couple of very bad nights of itching and stopped taking Pentasa for a whole week. The rash/itching went, but the results on my tum were not good! Took it again once after the flare up, didn’t seem to help so I haven’t taken any more but did an almost one whole day water-fast, and have resumed solid food with things that are recommended (in small quantities) – white break, avocado, banana. I’ve gone ‘cold turkey’ on tea (never drink coffee!) and am drinking either pure still water (from a bottle, not the tap) and today had freshly squeezed lemon juice in hot water – so far, so good! Plan to have chicken and potatoes without skin tonight.

I also get night sweats, but I think they are more likely related to the menopause…(?)

I’m now considering juice-fasting, or at least the possibility of introducing juicing alongside other foods to help me lose weight and stay UC healthy. I have more research to do before I leap into anything, because I am worried I might make things worse again by choosing the wrong foods… would be very interested to know if other UC patients have tried juicing, and if it helped you! Oh, and I’ve also bought Adam’s book package…

Hi – I was diagnosed with UC in 1984 (I was 26). I’ve been on sulphasalazine since then, started taking Pentasa suppositories after a small flare up last year. I have a colonoscopy roughly once a year.