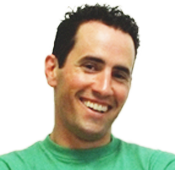 It has been six years and seven months or about 2,500 days since I’ve been living life after a doctor told me I have ulcerative colitis.

But much more important than that basic fact, is that right now is the happiest I’ve been maybe in all my life, and if you are feeling the same, that’s even better.  Life after the docs say “You have UC” is far from the end of good times, that’s what I believe and I hope you do too.

I believe food absolutely can play a major part in helping or hurting the life of UC folk, people like me.

But wait a minute, that first line is a slap in the face to many people who use iHaveUC.  Why…???

Well take your Gastro doctor for example.  He or she more often than not would disagree with me.  I’m talk 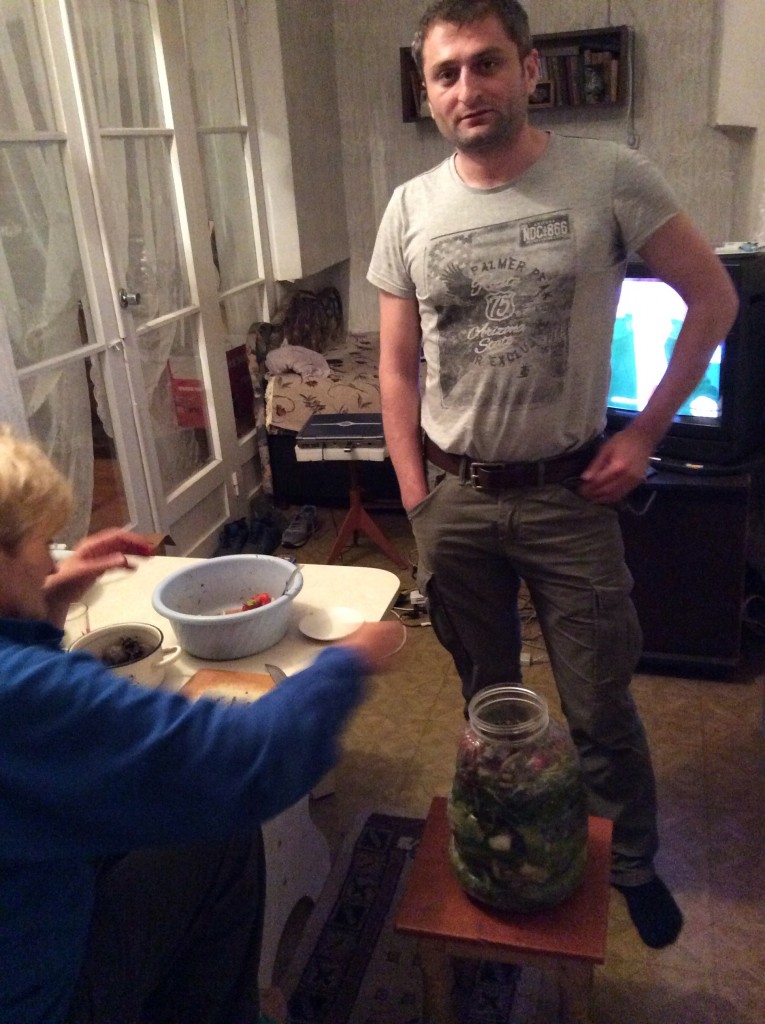 David’s mom making some more of her veggie sauerkrautish mix

ing about your b-hole examining, medication consulting/prescribing often western medication trained GI who often deals with all sorts of diseases and often can’t keep up to date with current published studies because he/she is sooo darn busy (maybe a bit of exaggeration…maybe not…you make that call). Dr. Stollman…my GI…I am not talking about you…well maybe a tiny tiny bit yes cause i know you’re super busy.  (I hope you poke me nicely come my next scoping day:)

Or, better yet, take your internet connection where you can find all sorts of places and people who deep down truly believe(or at least they have convinced me they think this) that diet plays either “no” part in their individual disease or very little.

Heck, you don’t have to travel far to find UC’ers who have had their colon removed who would tell you diet plays no part in the disease or very little. ( Of course there are others from this same sub-group who think differently).  But again, there are many confusing messages here.

And of course you have me, and what is my story?

and double guess what…

No sir, I stopped taking medications several months prior to hearing that because they were not helping me or would turn my bones to powder like prednisone steroids have a habit of doing…so…I hope you don’t take this personally… “But my diet changes are the reason for my success.  Not your medications, not your biologics, and most unfortunately…this probably makes no sense to you otherwise you would have told me to stop eating all those slices of pizza, and white breads, loaf after loaf and the rest of that BRAT diet.  Geez amigo…you were the one who told me to eat white toast everyday after I was diagnosed when i was bleeding like crazy and using two or three rolls of paper a day.  That sort of grain is exactly what I avoid now.

So what else, why am I taking a morning of my vacation here in the republic of Georgia, just south of Russia, north of Turkey, east of the Black Sea and west of Azerbajan, and writing this post? 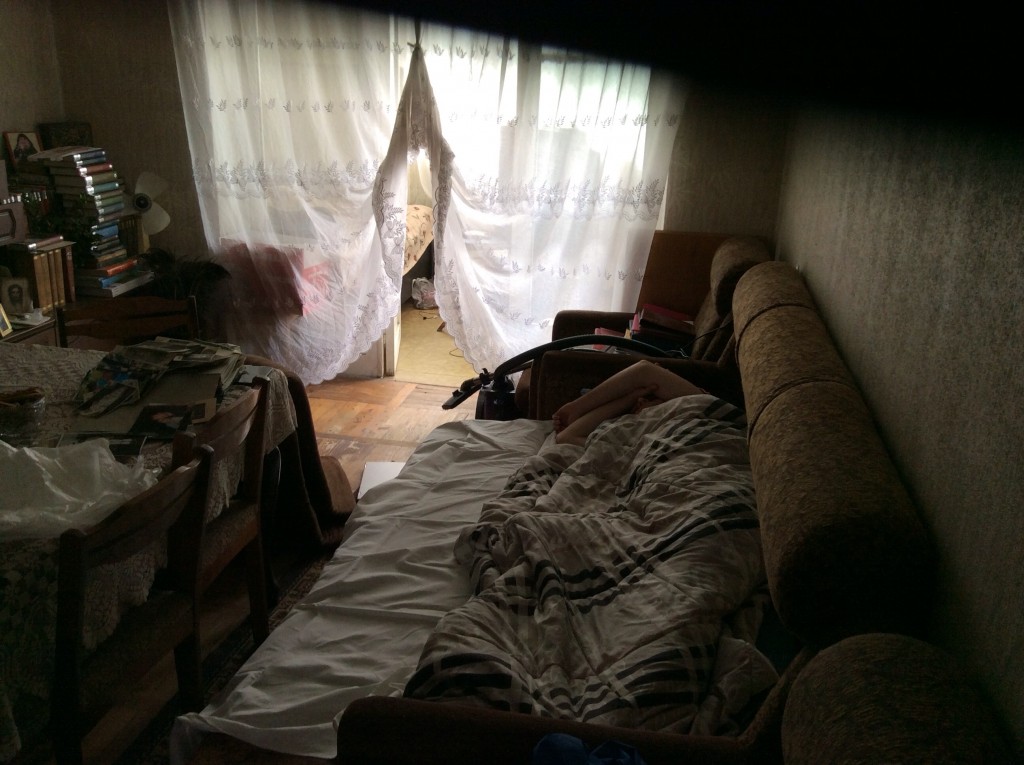 Here is the reason…

I love to travel.  Those of you who follow the site have maybe even read my postings from previous years where I have talked about some of my trips.

Traveling for me to far off or close lands where I can see and experience other common folks normal lifestyle is just about at the top of my own WILAE list (What I like about Earth).

Usually they involve my beautiful wife Michaela…but sometimes she gets sick of me and pushes me out of the apartment and I end up in places like The Republic of Georgia.

So what’s with the David guy and why is he mentioned?… It is simple, he is one of the coolest guys I’ve ever met, we met in Prague (where we both currently live) nearly seven months ago.  And last week, about four days prior to setting off we purchased train tickets to Budapest(highly recommend it in the warmer months, especially if you’d like to learn how to party from some of the friendliest and most beautiful folks around) then airfare to Kutaisi, Georgia.  He grew up near there(Abasha is the name of the village) between South Ossetia and the Abkazi region, a mini war/skirmish with Russia went down in these parts just a few years back.

I was so nervous that I would not be able to maintain my diet while here for two weeks.  A trip to Italy ended in disaster a few years back when I fell off the 5 year wagon and jumped on all sorts of breads…bleeding was a result. Lesson learned again:)

But this trip is blowing my mind.

David’s mom, and the rest of the locals I’ve met eat well.  They eat all sorts of whole foods.  Foods they grow and make with their own hands.  Cheese from the family cows.(and I previously thought there were alot of cows in Argentina…scratch that and throw in Georgia, maybe the whole caucus region… I dont know).  Fermented cabbage and beets and peppers, wine from their own grapes, beef from their grass fed cows.  Eggs, OMG there are chickens everywhere too.

And me, I’m eating all of it minus the breads.  But the high amounts of cheese and wine(lots and lots and lots at the baptism party two days ago for David’s cousin (everyone is an uncle or aunt or cousin…so not quite positive about the relations…not important either)…more wine than i’ve had in the past six years combined) along with the vegetables that typically sit in a big container for a few days and taste very sour, crunchy and salty are all producing some super poops.

Oh, I think I just heard David waking up, so gonna cut this short soon.

But do me a favor, and don’t ever think the diagnosis is the end of your dreams, or an all out end to you living your life and being happy.

It isn’t.  It really is not.  There are far far more difficult health problems out there on Earth.  And although colitis symptoms can pack a mean punch for long or short periods of time, our bodies and how they have evolved are amazing.  Just don’t count yourself out of a good life.  We all deserve it, and I believe we all can have it.

and below are some of my favorite trip pictures so far: 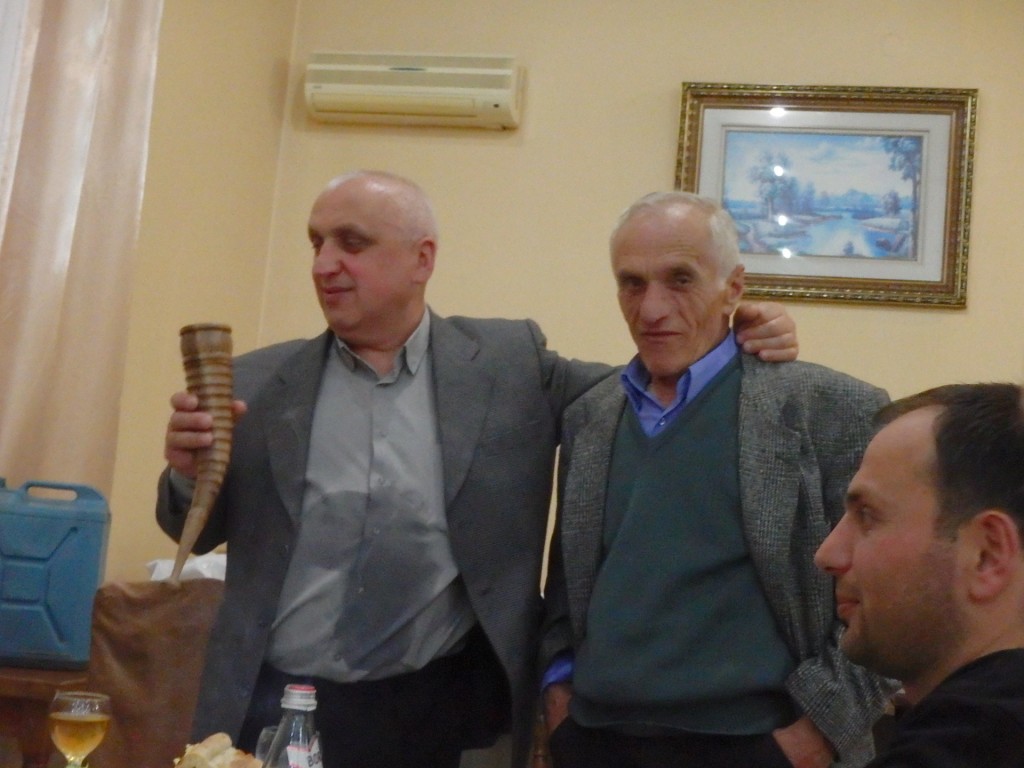 The guy on the right is David’s uncle. This party was in honor of his 70th birthday. The guy on the left, a family friend was the “tomada” aka…the guy who was voted early in the night to lead the party/toasts/craziness…I simply like how in the picture you can see he’s already spilled a glass of wine on himself 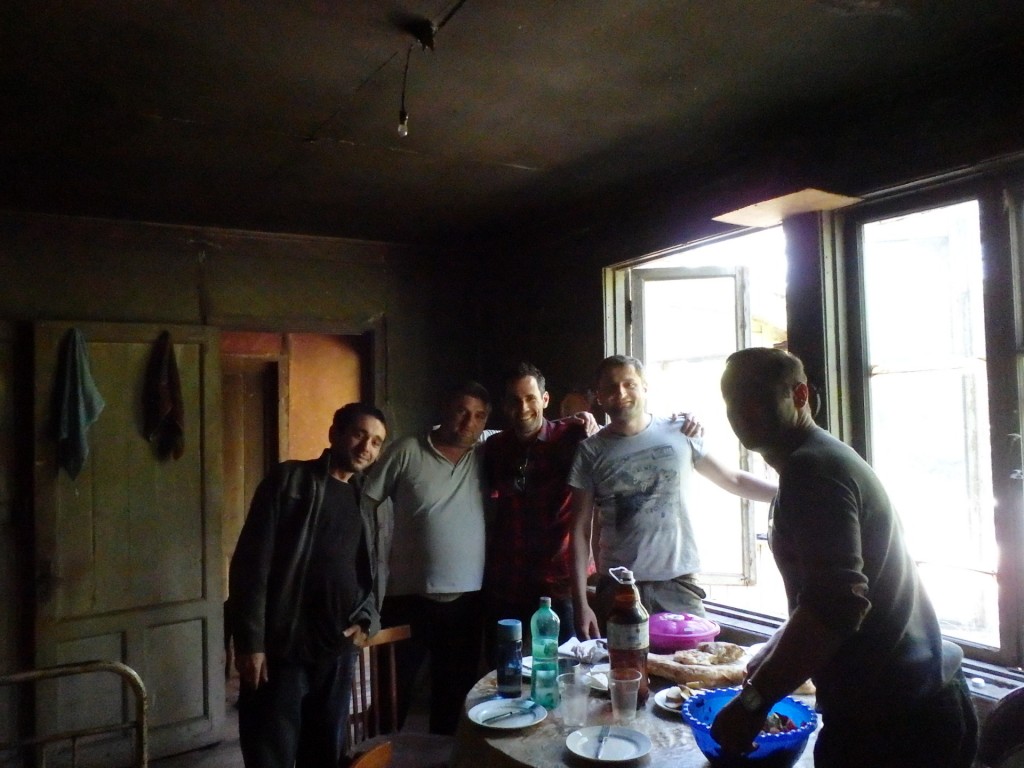 from right to left: Aleko, unknown co-worker of Aleko, Me, David and Otari up front right before we chowed down on some spis de pork and cucumber and tomato salad and some fresh cheese made by the unknown guy’s wife. They all jumped on the bread and beer while I was happy with my water 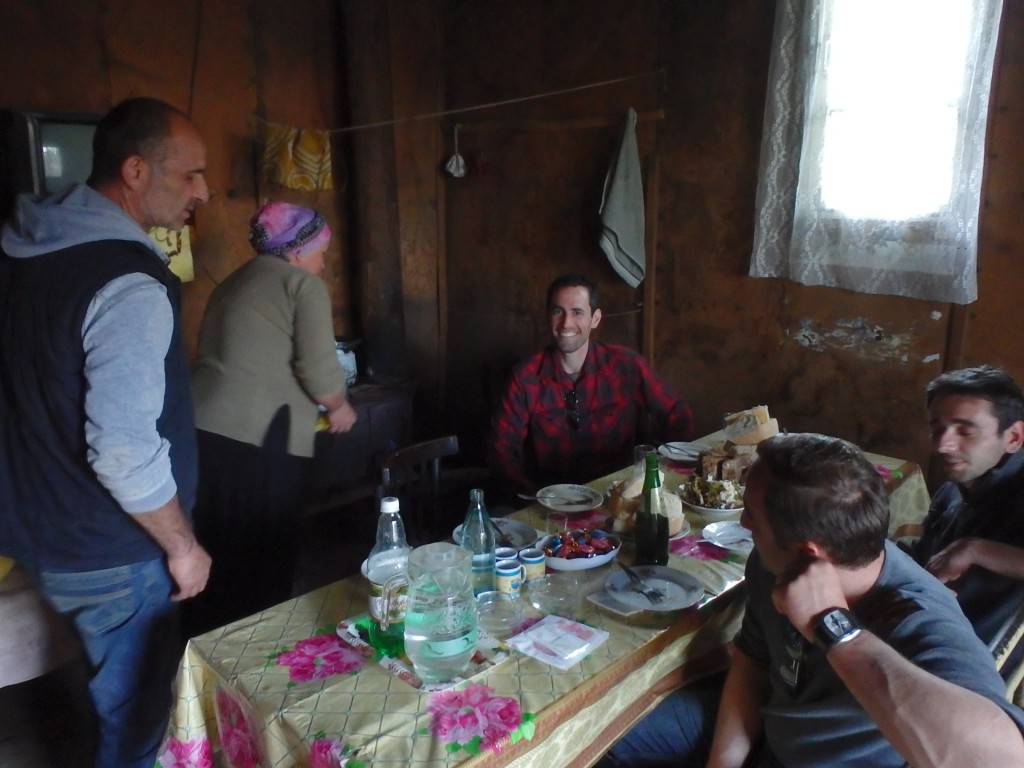 We hiked up to a village that is way off the electric grid, and the father and his wife (the two on left) invited us all in for a meal. Super nice of them, just wish we hand’t eaten less than an hour before. but still managed to put down a few bites of some of the food they had to offer. Nearly lost my mind on the tiny sip of his home-made chacha…aka Grappa…slivovice…super high proof indeed. 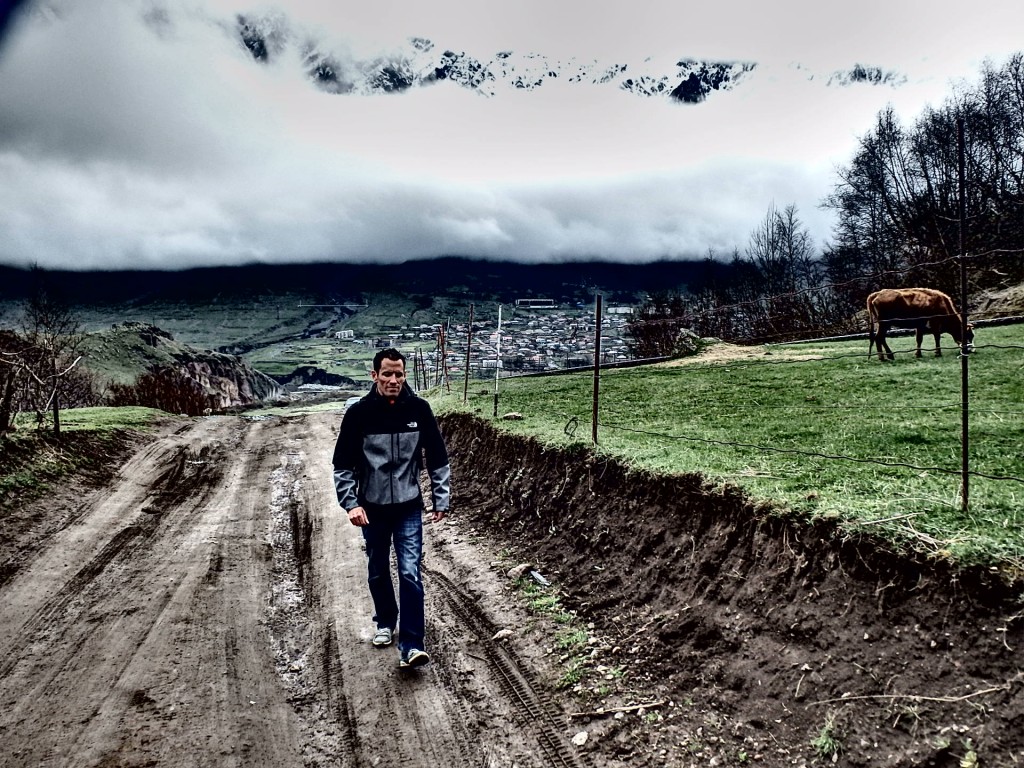 Hiking up the mountain in Kazbegi, Georgia 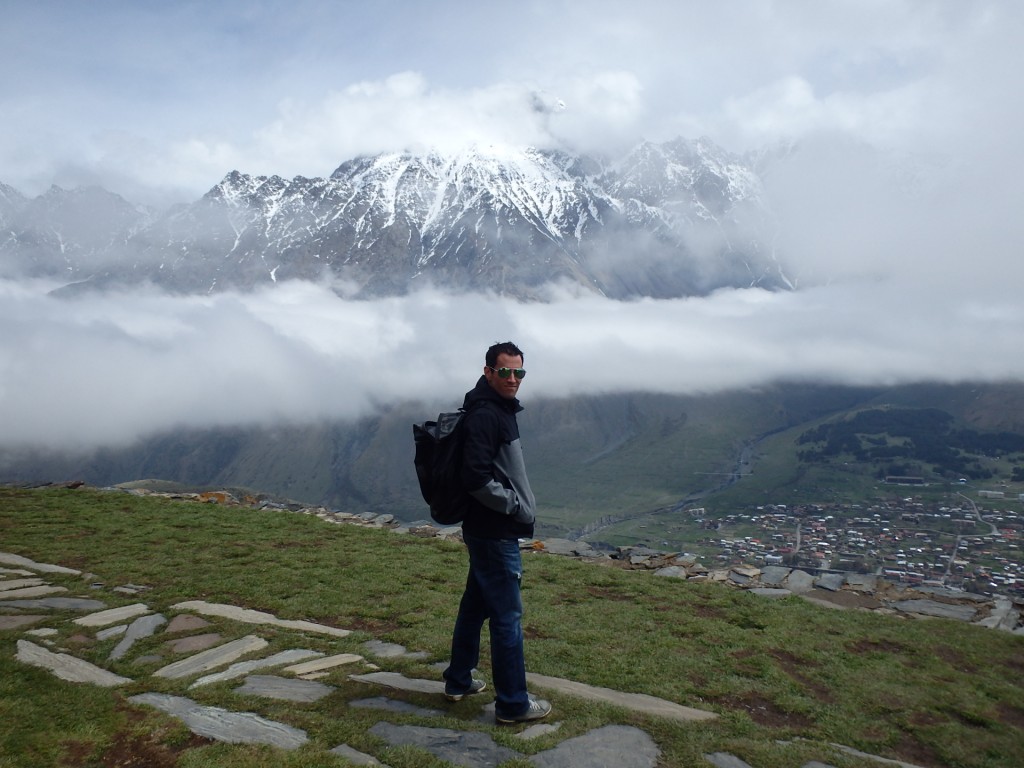 There were much higher peaks, but we made it to the monestary at the top of this one mountain, took some pictures and went down the “Monk’s Trail”…which was a super shortcut:) 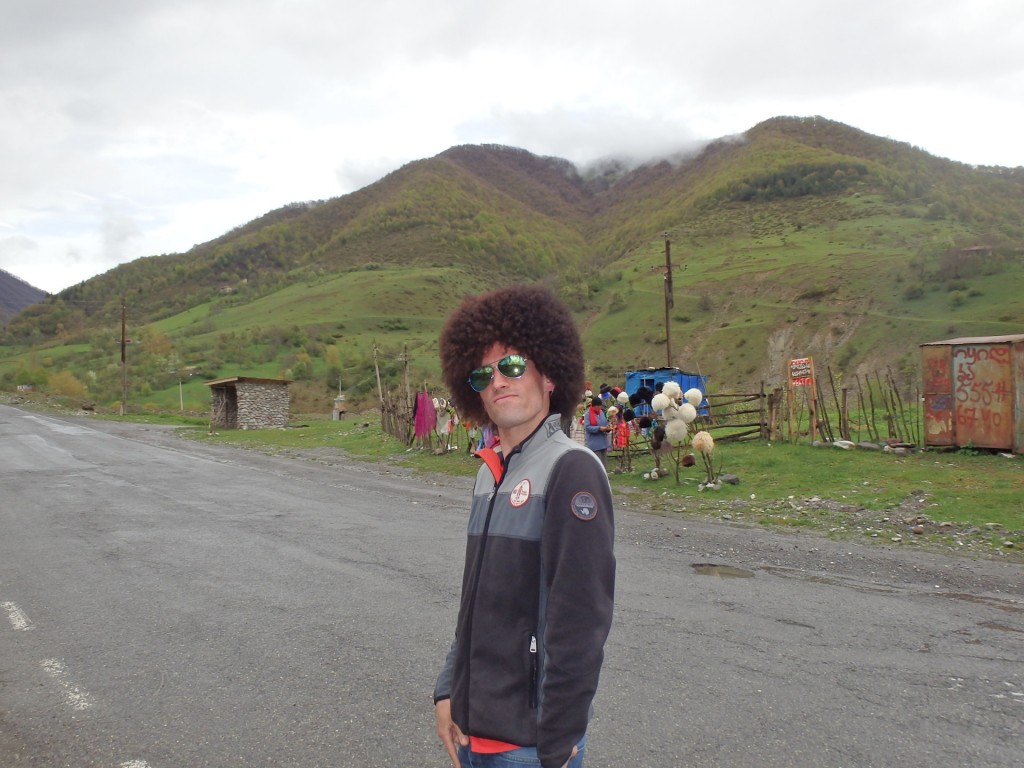 so this is my favorite purchase this year…smelling like sheep wool(cause it is), and looking ilke Jimi Hendrix…somewhat…the lady in the background raises, creates, and sells these hats which are warm for winter weather

I guess you haven’t seen enough of Georgia until you are stuck on the main highway from the capital Tblisi to the Russian border…best part was how the Sheppards didn’t seem to care one bit that they were stopping traffic on the highway, was a great time, and somehow moved past the heard and on to open road

Leave a Reply to shelly in maine Cancel reply