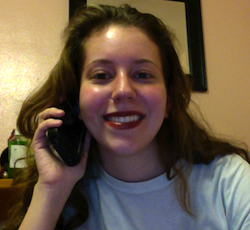 I am a 22 year old PhD student who has lived with UC since the age of 16. My original diagnosis was proctitis, but very recently it has spread to pancolitis.

I study Russian language and literature and I absolutely love it! I’ve finally found the thing I’d like to dedicate my life to studying, and I’ll be damned if I get my UC get in the way of achieving my goals.

Urgency, cramping, tenesmus, a tender abdomen, as well as arthritis in my knees.

What has really fueled the idea to write this entry was my decision to have my colon removed. It is not something I have taken lightly (as no surgery should be!), and I have to admit that I am extremely afraid of what the future will bring. It’s terrifying to imagine that just one decision like this has the power to change your life forever.

My surgery date is January 22nd. After then, I plan on sharing stories of what happened in detail, and I’ll be sure to include photographs along the way. But to begin with what has led me to this point, I’ll give a brief history of my life from my diagnosis up until now:

I was 16 when I experienced my first Ulcerative Colitis symptoms, which, to my knowledge, were triggered because I began to eat meat again after being a vegetarian for 2 years. My first symptoms were constipation and tenesmus. At first, I attributed this to the fact that my body wasn’t used to digesting meat. But as days went by, I noticed a new and scarier symptom: blood. After visiting my doctor, many weeks of giving stool samples to check for viruses, parasites, and bacterial infections, I was finally referred to a gastroenterologist. My first colonoscopy revealed that I had ulcerative proctitis, or ulcerative colitis of the rectum.

Although I was relieved to finally know what was wrong with me, I was scared to discover that this disease was chronic. Being that there is no cure, I had to come to terms with the fact that I would inevitably have to deal with flare-ups for the rest of my life. But the good news was that I had the most mild form of UC!

After about 8 months of experimenting with Rowasa (or mesalamine) enemas, hydrocortisone enemas, suppositories, and Asacol, I landed in the hospital for two weeks. My symptoms quickly spiraled out of control from several bloody bowel movements a day, to over 25. Anything I ate made me so ill I quit eating altogether.

While in the hospital I was pumped full of IV steroids, took hydrocortisone enemas, and began a dose of 50mg of 6-MP a day. I was finally able to taper off of prednisone, and with the help of 6-MP, was able to stay in remission for almost 3 years. But due to a variety of circumstances (like the fact that I had moved to another city for college and didn’t have a GI there, as well as the fact that I didn’t like the risks that 6-MP posed), I decided that I would try going off of 6-MP. I was fine medication-free for the last year of my 3 year stretch, but shortly I found myself facing another flare. I panicked. All of the bad memories from my awful flare that essentially ruined my senior year of high school came flooding back. I made an appointment with a new GI, but he was atrocious. He didn’t even ask to look at my medical records or do a colonoscopy. For all he knew, I could’ve been making the whole thing up. He asked what my previous doctor had prescribed me, wrote me a prescription for 50mg of 6-MP a day (good for 50 refills!), and sent me home. Not to mention, he said no word of the fact that 6-MP requires blood samples to check for potential liver or pancreas failure!

I decided that I would try my own route to battle this flare. Things were still very mild, and miraculously I got myself into remission by taking the probiotic Align and following a strict diet.

I remained in remission for another year before having another flare.

This one began in January 2012. I thought I would be able to control things like last time, but I quickly discovered that things were way worse than I could’ve imagined. I tried everything — VSL #3 strong probiotics, Align, and then later in summer I tried the specific carbohydrate diet. Nothing worked. Desperation led me to call my awful doctor, and he prescribed Lialda this time. To make a very long and painful story short, I ended up having a vicious allergic reaction to it (involving 10x the amount of blood I was seeing before, 25+ BMs a day, etc.)

This flare (which I am still in) was the worst of my life. I moved to another state for graduate school and soon found a GI (who I actually liked!) A colonoscopy revealed that my former proctitis had spread now to my entire colon. I decided that Remicade would be the best option (since 6-MP takes months to build up in your system.) During the weeks I waited for the insurance to process the request for Remicade, I was on my death bed. I couldn’t even drink water without having to run to the bathroom. I just prayed that I could survive long enough to get the Remicade and continue with life.

I’ve since been on Remicade, which has helped me immensely, but not enough to where I feel like a normal person. Because of this I’ve decided to go through with the surgery.

This wonderful website has helped me so much with coming to terms with everything that is about to happen, and I hope that my story can potentially help someone as well. I’ll be creating my own blog to chronicle my experiences with the surgery in more detail, and will add a link to it with my other post about post-surgery life to this site.

– Immunosuppressants (like 6-MP and Remicade) have helped me the most over the years.
– Anything with mesalamine made my blood output 100x times worse, and I’m fairly certain that I am allergic to it. I’ve tried Canasa, Rowasa, and Lialda.
– Prednisone, and most steroids in general, were awful for me. I experienced bad mood swings, painful joints and bones (I felt like I had the body of a 90 year old), and moon face. The only steroid that was tolerable for me was Entocort, which is a slow-release steroid that is meant to release in your intestine. Even hydrocortisone enemas made me experience the bad symptoms that are associated with steroid use.

I am a 22 year old PhD student who has lived with UC since the age of 16. My original diagnosis was proctitis, but it spread to pancolitis.