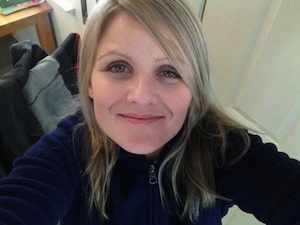 I am a 35 year-old female. I live in Chico, CA. I have two sons ages seven and twelve. I am happily married. I have never had a problem in the relationship department. I was diagnosed with UC in 1997 just before my 20th birthday (16 years ago).

I am a full-time student working towards a Bachelor’s degree in Liberal Studies and a teaching credential. I work out. Right now I am doing the Insanity videos. I have already done Insanity twice. I also did P90X twice. I still do P90X abs because it’s AWESOME! My sons and I started karate lessons a few months ago. We will be testing for our yellow belts soon.
I like arts and crafts but haven’t had much time to indulge in that for the last few years.

For the past few weeks I have been experiencing a mild flare. Major stomach pain in the morning. Pooping feels like birthing a child. My insides do what they want, wrenching and contracting like I’m in labor! I try to breathe through it and relax my muscles. When I finally stand up there is a pathetically small amount of poop, along with several small floating science project-looking globs of bubbly mucus/blood in the toilet. Gross! This happens with each of my three to five morning trips to the potty.

Five or six times throughout the day I pass some pinkish-beige mucus(?) Poop(?) I don’t know what it is. I just know it has to come out or I will have urgency later. Fortunately I don’t have a lot of problems with urgency during the day, just sometimes in the morning. I can usually keep my morning urgency under control too, as long as I try to pass Something. I get a little crampy, and I always feel “off,” but I’m thankful I’m not in horrible pain and I don’t have urgency.

I was diagnosed with UC in 1997 at the age of 20. I had been ignoring my symptoms for over six months (wet farts-yuck, small amounts of mucus, stomach pain, fatigue). Even though I was in a lot of pain I thought I was just sick. I thought that it would go away. Then one day I was driving and I couldn’t hold it. I had to stop at a gas station, ASK FOR A KEY, and run to the bathroom (a separate building a hundred yards away). In the bathroom my bowels unleashed a horrendous amount of blood all inside my pants and in the toilet (literally think “The Shining”). I spent a half hour cleaning up, returned the key and went home to cry in the bathtub. That was it. I had to go to the emergency room.

They told me I had hemorrhoids. When I insisted that it was more than just hemorrhoids they referred me to a specialist who had a two month waiting list. I waited. I took a day off work here and there if I felt horrible; I zombied my way through classes. Finally I got to the doctor who took one look at my colon and said “You should have come here sooner! Your colon looks like hamburger!” I told her that her office had a two-month waiting list. She said “You should have told us it was an emergency.” (Make sure you tell your doctor how you really feel). Then she told me I have a chronic disease. I said “What, you mean I’m going to have this for THE REST OF MY LIFE!!!???” and I burst into tears.

For about a year, maybe two, it was on and off the Prednisone, six Asacol a day, enemas, suppositories, nothing really worked well. The Prednisone worked well at first, but then a flare would come as soon as I stopped. I thought “This is it, my life is ruined. I’m a poopy mess. Nobody will ever love me. I’m doomed to live in diapers, or worse (?), wear a poop bag. The Prednisone will eat my bones, make me fat and give me pimply moon face.” The enemas and suppositories? Come on! How do you explain that to your bed mate? “Uh excuse me honey, I have to shove something up my butt real quick.” Before I got sick I had been planning to go work on cruise ships and travel the world. Now I was trapped in my own body and buried in costly (and worthless) meds. Those were the early days (months).

In 1998 (a year after my diagnosis) I found a miracle called Shark Liver Oil. I was in the middle of a bad flare and nothing was working. I took it for a month or two and my symptoms disappeared! I kept taking the stuff, sticking to that brand plus Asacol and the symptoms stayed gone.

In 2003 I stopped taking the Shark Liver Oil and all meds. My symptoms stayed gone for over a year. In 2004 I got pregnant and in 2005, just before my first son turned five, I had my second healthy baby boy (nine days late, again!). Two months before I had him, though, my symptoms had returned. I breastfed for three months and once I stopped, my symptoms slowly went away (no meds!)

For about four or five years I stayed off the meds and was mostly symptom-free until 2010. That June, I started to see symptoms of a flare. I had to do a lot of hoop-jumping because I had lost touch with my doctor (don’t lose touch with your doctor, even when you are feeling good!) I had to go to the emergency room a couple of times, and also the local family health clinic where I saw a random family practitioner. I begged them to take a stool sample.

A week later I was shocked to discover that my stool came back positive for Campylobacter, a CDC-flagged pathogen that is transmitted to food by unwashed hands! I couldn’t recall where I might have acquired the bacteria, but then again it had been two months since my symptoms first began. To me, it seems strange that doctors don’t routinely monitor our stool for bacteria, which is believed to be a suspect in what causes our disease. After all, Helicobacter Pylori is believed to be what causes stomach ulcers!

Anyhoo, in September (three full months after my symptoms had begun) I was hospitalized for six days. I had lost about twenty pounds from my already small frame. They gave me a colonoscopy, a shot of Methotrexate, Flagyl, some other antibiotic, Prednisone and Asacol (I’m allergic to Sulfa). When they released me they gave me a prescription for Colazal, the rest of my Prednisone and antibiotics and a few more Methotrexate tablets. Slowly but surely I got better, but never great. I started to become steroid-dependent.

In January of 2012 my doctor put me on 6MP. I went straight into remission. I had normal log poops for the first couple of months! Then my stool got softer but I still felt great! Then I started to get a little irregular. Then I started pooping more frequently. Now I’m having a mild flare. Bummer.

While my current flare is still “mild,” I’m going to slowly make the transition to the SCD lifestyle. My hope is to achieve remission without changing or adding meds. I ordered a Yogourmet yogurt maker and the starter powder. I hope I got the right stuff. I’m going to wean off of milk, bread and sugar. The SCD is dramatically different from the diet I’m used to, so I’m taking baby steps.

I read that VSL#3 is helping some people achieve and maintain remission. VSL#3 is a powerful probiotic containing around 900 billion cells. If I could afford it I would try it. I think the SCD yoghurt is my best option at this point. I plan on buying the Feeling Crappy to Feeling Happy/cook book combo next paycheck. I’m actually kind of excited to try this diet! I think it will make me healthier than I’ve ever been in my life. I want to thank you, Adam for being such a positive inspiration and for providing a forum and a ton of information for all of us with UC!

Fortunately, science is making great strides towards better treatments for our disease. I truly believe that we are close to understanding what the heck makes our colons so special. (Haha) A few up-and-coming drugs are Tofacitinib, Vedolizumab (why the crazy names?) and MDX1100, among others. While these are designed to treat the symptoms and not the cause of UC, they sure have the potential to make life more comfortable while we wait for a cure.

My family is very supportive, especially my husband. I have been “coming out of the closet” more often lately with friends and acquaintances. I guess now that I’m older I care less about what other people think of me.

Colazal (2.5 years). 6MP (one year). 6Mp works pretty well; this flare-up is mild. Have taken lots of Asacol, not so great. Prednisone doesn’t even work anymore for me. I take probiotics every day, like 40 billion cells. I often take multivitamins.